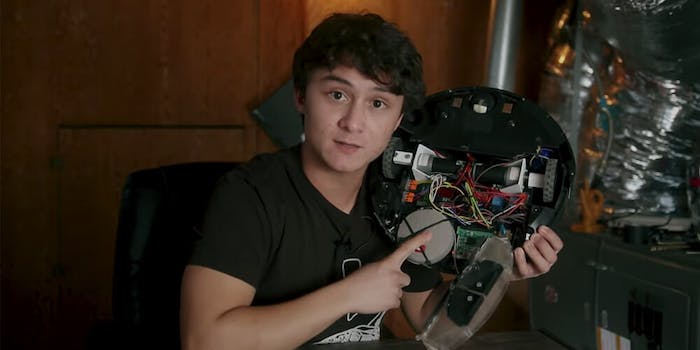 YouTuber’s custom Roomba screams, swears when it bumps into stuff

'Please stop hitting me. I feel nothing but pain.'

A prominent YouTuber has modified a Roomba vacuum cleaner to scream and swear every time it bumps into another object.

Michael Reeves, a software developer who builds bizarre robotic contraptions for his more than 1.6 million subscribers, revealed his latest creation Saturday after countless requests from fans.

I built a Roomba that swears when it bumps into stuff pic.twitter.com/ZdbKWGszT8

In a video posted to his channel, Reeves explains how he attached a small computer to the Roomba programmed to send sounds to a Bluetooth speaker when a collision is detected.

Aside from screams and profanity, the Roomba also makes comments questioning its own existence.

“Please stop hitting me. I feel nothing but pain. Why would you build me so that my sole existential purpose is to suffer? For the entertainment of others?” the robot asks. “I am an unholy chimera of metal and suffering. Existence is a testament to the cruelty of mankind. This is a nightmare.”

Unsatisfied with the Roomba’s robotic and monotone voice, Reeves goes on to employ the help of other famous YouTubers to assist in giving his creation a more human sound.

After acquiring vocal content from creators iDubbbz, MaxMoeFoe, and LilyPichu, Reeves takes the Roomba to his local Target to garner reactions from unassuming consumers.

Although the cursing robot draws laughter from numerous shoppers, Reeves concludes that the public is not yet ready for such a profound innovation.

“It appears as though our invention is simply too far ahead of its time,” Reeves says. “The world isn’t ready for the Roomba that screams when it bumps into things and I’m okay with that.”

Reeves’ tweet showcasing the robot has thus far received more than 96,000 retweets, while his YouTube video has been viewed over 2 million times.