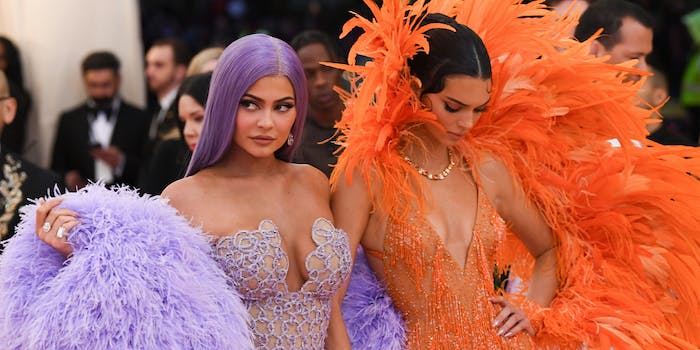 When it was announced that the theme of this year’s Metropolitan Museum of Art’s annual gala co-hosted with Vogue is “Camp: Notes on Fashion” to match the new fashion exhibit at the Costume Institute, we knew that celebrity attendees would be going all-out for Twitter reactions, no matter how they interpreted this year’s confusing theme.

As we wrote on Monday’s story, “The theme’s title is a play on writer Susan Sontag’s essay ‘Notes on Camp,’ one of many famous attempts to define the famously ambiguous aesthetic. … Camp embraces the uniquely flamboyant and skirts the line of good taste.”

And boy did celebs deliver on campy outfits! Twitter responded in kind with memes of the dresses that graced this year’s pink carpet.

Leading the pack are the Jenner sisters, who arrived in matching Versace feathered gowns—Kendall in bold orange and Kylie in icy lavender that matched her wig. While both looked stunning, people on Twitter couldn’t help but compare their looks to several pop culture pairs that have supposedly inspired them—everything from the evil stepsisters in Disney’s Cinderella and Ella Enchanted to the hilarious duos in comedy films like White Chicks and Dumb and Dumber.

Kendall and Kylie looking like the evil step sisters in Cinderella #MetGala pic.twitter.com/0bcOWhmtTp

If Kendall and Kylie did get inspo from Hattie and Olive from Ella Enchanted IM NOT EVEN MAD #MetGala pic.twitter.com/SILfOtWQNS

Kendall herself acknowledged the comparisons in her Instagram stories.

Providing the Cinderella to the Jenner sisters’ wicked stepsisters look is Zendaya, who stole the show dressed exactly like the Disney princess in a Tommy Hilfiger gown that was “magically” lit up by her own fairy godmother (stylist Law Roach), complete with a glass slipper she left as she ascended the Met steps.

#MetGala ZENDAYA "lost" A SLIPPER ON THE STAIRS, SHES SO DEDICATED TO THIS ROLE THE ACTRESS REALLY JUMPED OUT pic.twitter.com/XjvVl9bi1e

can’t believe the irony in kylie and kendall arriving earlier and accidentally channeling the ugly step sisters, and then zendaya showing up fashionably late in a cinderella getup pic.twitter.com/J684e1P8kK

People demanded a photo of Zendaya with the Jenner sisters.

Completing the Cinderella narrative is Riverdale’s Madelaine Petsch as the fairy godmother (apart from Roach, that is).

Here are the rest of the memes comparing Kendall and Kylie to other pop culture duos.

As Shawn and Marlon Wayans’ Brittany and Tiffany in White Chicks

I think it’s so sweet and iconic of kendall and kylie to pay homage to this cinematic excellence #MetGala pic.twitter.com/lwzjAxOlYP

Kylie and Kendall about to win the Winter Sports Games #MetBall2019 pic.twitter.com/heVgGJsQM6

As cartoon characters, including Velma and Daphne from Scooby Doo

Kylie and Kendall channeling Velma and Daphne at this year’s #MetGala. pic.twitter.com/lO5cXcdJbK

Kylie and Kendall really went out and stole their look huh…. #metgala pic.twitter.com/GxGKG1gNN8

Some even think the Jenners are giving “Takis & Flamin’ Hot Cheetos” or Fanta orange and grape vibes.

A lot of Twitter users are just shocked the sisters actually made an effort to follow the theme, after previous years of seemingly missing the mark or completely ignoring it.

me seeing that kendall and kylie have actually followed the theme #MetGala pic.twitter.com/2XjNH1H2D4

Kendall and Kylie actually making an effort for the #MetGala ??? I am SHOOK pic.twitter.com/J8HA53ZXXZ

While we’re on the subject of Met Gala outfits that reminded people of entirely something else, here are a few more that contributed to Monday night’s wealth of memes.

why cardi b look like my pad when i sneeze on my period #metgala pic.twitter.com/DHUKCXwuxz

Cardi b looking like me on my period #MetGala pic.twitter.com/GXqOZzpJhw

as a human bean who is currently menstruating i am DEEPLY bolstered by @iamcardib rolling up to the met gala dressed as an anthropomorphic Crimson Wave like wow thank you my queen i am obsesseddddddd 🥊 pic.twitter.com/zPthuM3dGp

okay but why is cardi b a red blood cell #MetGala pic.twitter.com/Eyd5zaOCyL

Cardi B. is a virulent red blood cell. But I'm kind of impressed. #Metgala pic.twitter.com/4DgDdmxmpb

@QUEEN_SOPHISTIC’s “aunt said Cardi B looks like a placenta and I can’t f*cking unsee it.”

Was just shaken to the ground by the ultimate duvet dress @iamcardib #metgala pic.twitter.com/SDKmVnxTOr

Cara Delevigne’s outfit looks like the pencil case that @pathetic_sam used to bring to school.

Emily Blunt said “Fuck it if The Academy won’t give me my Oscar Award I’ll just BE my own Oscar Award.” #MetBall2019 #MetGala pic.twitter.com/dGjaXZoaoD

Meanwhile, Katy Perry dressed exactly as a chandelier (at first).

Or is it Lumière from Beauty and the Beast?

Katy Perry at the #metgala pic.twitter.com/mzafVriUr1

#MetGala #KatyPerry When you misread camp and you show up as a lamp pic.twitter.com/DtHzKXTGZ4

Whether Kylie, Kendall, Zendaya, and the rest of the celebs successfully adhered to the camp theme, there’s one thing they definitely achieved: Gracing us with meme fodder to tide us over until 2020.