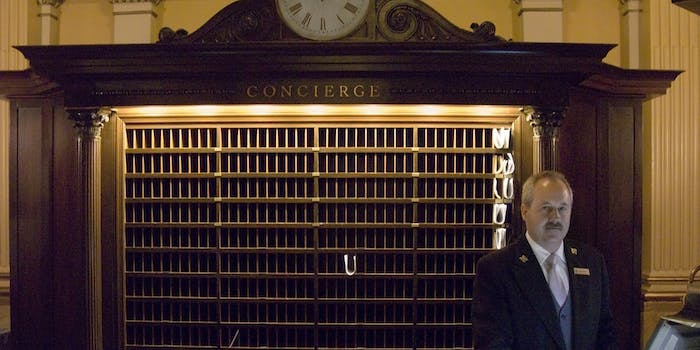 Your fear of sounding like a clueless weirdo is grounded in reality.

Most New Yorkers know to cut the tourists some slack: Especially for a first-timer, the city can be overwhelming. But there’s no conceivable excuse for some of the outlandish requests and expectations hotel concierges deal with every day, as collected in a scathing and hilarious new Tumblr.

“How May We Hate You” is run by Anna Drezen and Todd Briscoe, both authentic Times Square hotel concierges with access to a seemingly bottomless well of mind-melting customer service conversations. Read a few and you’ll wonder how these two maintain their sanity for even one shift.

The simplest questions alone could do serious mental damage. “”The C train … is that, like, a bus?” asks one genius. “What floor are the taxis on?” asks another. “Which floor is the 35th floor?” one person wants to know.

Then there are the hotel guests who have a little trouble framing their needs. There’s the French family that wants directions to “Donkey Donald’s” (Dunkin’ Donuts), the Russians who want a jazz lounge that serves steak and turns into a not-too-loud 90s hip-hop nightclub—but one that’s in walking distance, please. And how to explain the client bellowing “I NEED A PRESCRIPTION FOR VALTREX!” instead of inquiring after the nearest pharmacy?

Let’s not forget the just plain rude or unhinged people, either, from the obnoxious evangelist, to the woman who calls wanting to know if there’s a convention “in the East Village” or if her husband is just cheating on her, to this guy: “A guest came over to my desk, farted, and walked away.”

The submissions line is open, too,, so ideally we’ll soon get a sense of hotel stupidity as it’s practiced all around the globe. For now, though, it may be difficult to top the anecdote of the sophisticate seeking not just any Starbucks but “a cool one.” We just hope he’s still out there looking.