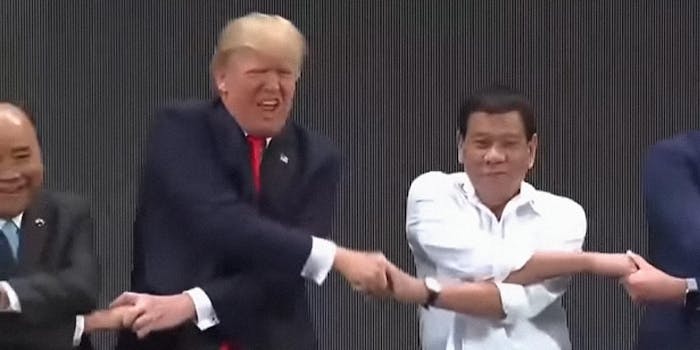 What the heck is Donald Trump doing with his face in this photo op?

On Monday, President Donald Trump met with the 10-member Association of Southeast Asian Nations (ASEAN) as part of his 12-day tour of Asian nations. At the beginning of the conference, the attendees gather for a traditional handshake, where members cross their arms to grab the person next to them, creating a chain.

In doing so, standing between Philippines President Rodrigo Duterte and Vietnam Prime Minister Nguyen Xuan Phuc, America’s president did this.

While the Associated Press called Trump baffled by the handshake, the real mistake was made by Russian President Dmitry Medvedev, who didn’t bother to cross his arms at all.

.@realDonaldTrump joins other leaders in a handshake with President Rodrigo Roa Duterte, right, during the opening ceremony of the 31st ASEAN Summit pic.twitter.com/mfqTU8AmUr

The faces Trump made, a prime example captured above by the New York Times‘ Doug Mills at just the right time, became the thing of memes—a kind of “revenge,” as the Washington Post described it, for the White House blocking reporters covering Trump’s trip.

good luck to whoever has three weeks to get this regional production of Mamma Mia! into shape pic.twitter.com/eCZ81VxbMi

A bit awkward, but what we have grown to expect… pic.twitter.com/O29AdWVQbi

Of course, as with anything Trump-related, people see what they want to see, because not a second later, he was flashing a perfectly normal, enthusiastic grin.

You can watch the full video here and decide for yourself. Remember, even former President Barack Obama had his awkward handshakes.