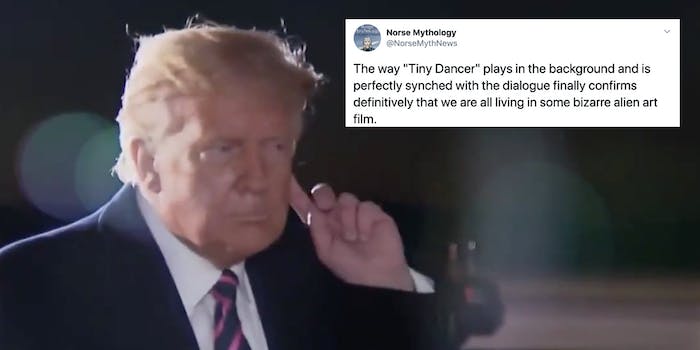 'We are all living in some bizarre alien art film.'

The internet is convinced that reality is just a bizarre film after President Donald Trump reacted on Friday to the passing of Supreme Court Justice Ruth Bader Ginsburg.

While leaving a rally in Minnesota, Trump was informed that Ginsburg died at the age of 87 due to complications related to pancreatic cancer.

As Trump stated that it was the first time he had heard of the news, Elton John’s “Tiny Dancer” played in the background.

“She just died?” Trump asked. “Wow, I didn’t know that. You’re telling me now for the first time.”

The song’s gentle tone combined with the arguably historic moment convinced many that humanity is stuck inside some sort of extraterrestrial simulation.

“The way ‘Tiny Dancer’ plays in the background and is perfectly synched with the dialogue finally confirms definitively that we are all living in some bizarre alien art film,” @NorseMythNews tweeted.

Others argued that the clip was made even more unprecedented given that Trump did something he rarely does by coherently responding to a tragedy with kindness.

Trump not ruining the moment with a crass or inappropriate comment had many confused.

“Okay fuck it, I’ll say it—Trump showed restraint and grace when he first spoke to reporters about her death,” @idrislg79 said. “And tiny dancer playing in the background was poetic.”

But not everyone was applauding the moment. Many stated that the iconic song had forever been ruined as a result.

The video caused the term “Tiny Dancer” to also become a trend on Twitter, leading many to ask Elton John to stop Trump from using his song.

“Why is @eltonofficial not suing over the fact that Tiny Dancer us being played at illegal dump ‘protests?'” @raynefeliciano said.

A political fight has ensued since Ginsburg’s passing over whether a new justice will be nominated prior to the election.