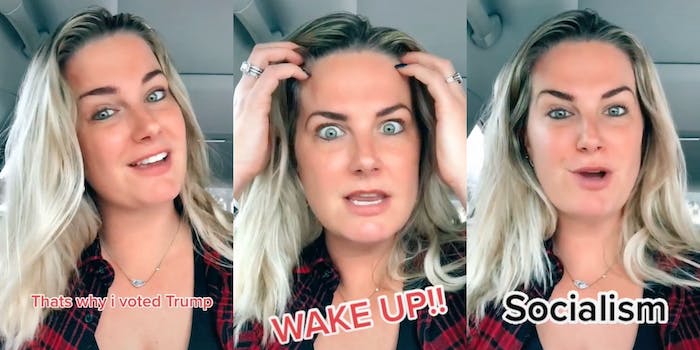 The irony is apparently lost on them.

Never content to rest on their laurels, Trump supporters have found a new cultural touchstone to appropriate while completely missing the point of the original: Green Day’s “American Idiot.”

Pro-Trump TikTokers have recently begun to use Green Day’s 2004 anti-Bush anthem in their videos to take shots at liberals. They seem to be particularly fond of the line “One nation controlled by the media,” which in their minds refers to the likes of the New York Times and Politico rather than Fox News and OANN.

Take this Jan. 9 post by Candace Kettlehut, who uses “American Idiot” to help explain why she voted for Trump. Kettlehut accuses CNN, MSNBC, ABC, and, curiously, Fox of “hearing only what’s on their agenda.” As Green Day revs into the song’s infectious chorus, one word appears ominously in bold on the screen: “Socialism.”

“Green Day knew it all along, since 2004!” Kettlehut captioned her video.

But what exactly did they know? The band members were staunch critics of President George W. Bush, and they hoped American Idiot, released in September 2004, would convince young people to vote him out of office. (It didn’t.) They were ashamed of the U.S. response to 9/11 and the Iraq War, and they couldn’t stand fearmongering cable news networks.

It is not hard to glean these themes from American Idiot, a broad-strokes concept album about suburban disenfranchisement and political hypocrisy whose lyrics are basically all text, no subtext.

Frontman Billie Joe Armstrong’s disdain for Bush has only been rivaled—or perhaps surpassed—in recent years by his contempt for Trump. In concert, Armstrong has changed lyrics from “American Idiot” to take aim at the outgoing president, swapping “I’m not a part of a redneck agenda” for “I’m not a part of a MAGA agenda.” He’s also changed the lyrics on American Idiot track “Holiday” from “pulverize the Eiffel Towers” to “pulverize the Trump Towers.”

Oh, and then there’s that footage of Green Day chanting “No Trump! No KKK! No fascist USA!” during the 2016 American Music Awards.

The irony of using “American Idiot” to own the libs is apparently lost on tons of Trump-loving TikTokers, and other social media users have roasted them for it.

Maybe Armstrong will catch wind of this disturbing trend and write a concept album about the perils of stripping songs of their context for social media posts.