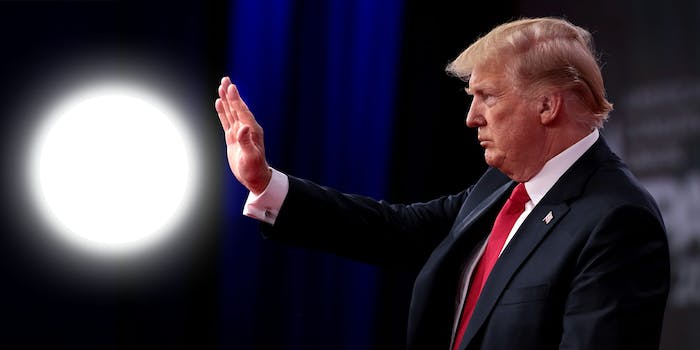 One year ago, President Donald Trump sparked a countless stream of memes when he touched a glowing orb while visiting Saudi Arabia. On Monday, people pointed out that it was Trump’s first “orbiversary.”

Although the trip was the president’s first excursion outside of the U.S. since taking office, the biggest point of curiosity became the mysterious orb photo. The “orb” was a ceremonial gesture to mark the opening of the Global Center for Combating Extremist Ideology, but it soon became a full-blown meme frenzy.

Basically, everyone loves to riff on the orb picture, and a year later people are still finding it hilarious.

Mueller won't be able to banish Trump until he destroys the coin, the orb, and the other 5 horcruxes, the identity of which have not yet leaked. https://t.co/lhgIu4ytzB

It’s been a year since Trump touched an orb and he didn’t even have to pay it $130,000 afterwards. https://t.co/xdNFJqWpit

good morning everyone, today is the first anniversary of trump touching the orb

Some felt that the timing of the one-year “orbiversary” was suspiciously coincidental to a New York Times report suggesting that Donald Trump Jr. met with officials from numerous countries in the Middle East, including one connected to Saudi Arabia. According to the report, the officials met “primarily to offer help to the Trump team” ahead of the 2016 election.

The story was the subject of a frantic tweetstorm from the president over the weekend.

Happy one year anniversary to the Orb and @realDonaldTrump making a fool of himself!
As it turned out, Saudi Arabia & Trump were celebrating a successful joint project: Fu***ng Up With US Election.https://t.co/0D4EWaMeNH

Gee, I think I’ve seen pictures of you with lots and lots of Arabs. Dancing, with swords, and holding glowing orbs, and all sorts of stuff . Collusion? Or is it only collusion if you shake hands?

Despite the hefty amount of mocking on Monday, you can’t forget that the ultimate Trump trolling came from a group of Nordic leaders who apparently found the bizarre orb photo as funny as everyone else. They used a soccer ball instead of an illuminated globe to take their own picture together a few weeks after the original orb photo surfaced.