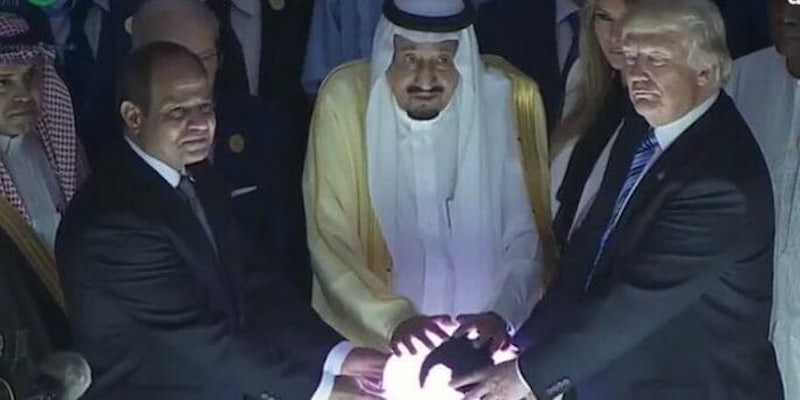 Donald Trump touched a glowing orb in Saudi Arabia, and Twitter lost it

This doesn't look awkward at all.

During a high-profile trip to Saudi Arabia, the first excursion out of the U.S. of his administration, President Donald Trump touched a glowing orb of the Earth on Sunday alongside Saudi King Salman bin Abdulaziz, and Egyptian president Abdel Fattah al-Sisi.

Maybe Trump didn’t think about the optics on this one.

It’s actually a ceremonial gesture to mark the opening of the Global Center for Combating Extremist Ideology in the Saudi capital of Riyadh, but when reduced to a single, still image, it looked quite a bit more bizarre than that. The image sent Twitter into a full-blown meme-frenzy, with countless people slinging jokes about Trump’s dedication and devotion to “the orb.”

Trump During the Campaign: "I will NEVER touch The Orb, even though its mysterious glow seduces and beguiles."
Trump Today: pic.twitter.com/eWoaDeXj8n

RIYADH — President Trump announced today that the Orb is his God now, praise to Its Luminescence, O how he longs for the warmth of Ørb pic.twitter.com/lSCjHgotgW

HANNITY: Trump orders everyone to kneel before the Glowing Orb, and the media loses it
GINGRICH: They fear the Orb!
HANNITY: It's pathetic

WHAT THE SAUDI KING THINKS
• No he isn't pic.twitter.com/k4J3eBKlBu

I hate Trump as much as anyone does, but I can't criticise his desire to hold a mysterious glowing orb

In about ten years our President will be Donald Trump and he will have his hands on a glowing orb with a bunch of Saudi Sheiks.

Does anyone know where I can find a picture of Donald Trump creepily touching a glowing orb?

Child: do you remember when Trump touched the Orb?

Me: Yes. None of us realized what it would-

Needless to say, Trump’s throngs of supporters who spent the campaign bellowing “America First” and “Make America Great Again” probably never expected to see him grasping a glowing orb alongside a pair of Middle Eastern dictators, his face eerily lit from below by its mysterious, enchanting glow.

And yet, there he is, touching the orb with a strange, muted expression on his face. It just goes to show that no matter how many bridges Trump seemed to burn during his campaign?and as far as Islam is concerned, he burned a lot of them?he can still be brought into the fold by a mysterious orb seemingly brimming with arcane power.

Trump still has stops in Israel, the Vatican, Belgium, and Italy on his itinerary before he finally returns to the United States on May 28. Whether any of those countries will do the smart thing and plan their own power orb ceremonies remains to be seen.