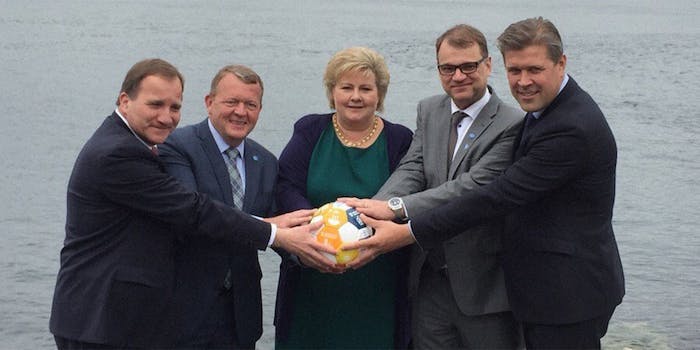 It's unclear whether the soccer ball started glowing after the photo was taken.

Its official: The meme-worthy photo of President Donald Trump touching a glowing orb with Saudi Arabian King Salman is now being mocked around the world. The latest trolling came from a group of Nordic leaders.

The photo, which gained attention on Twitter almost immediately, was a ceremonial gesture to mark the opening of a center dedicated to combating extremist ideology, but there is no doubt that Trump smiling as he touched a mysterious glowing orb was bizarre.

The prime ministers of Norway, Finland, Sweden, Denmark, and Iceland appeared to have found the photo just as amusing as everyone else did, judging by a photo making its way across the internet on Tuesday morning.

Sure, they’re using a soccer ball instead of an illuminated globe, but the comparison to the orb photo was immediately obvious.

Brutal… the Nordic prime ministers' recreating Trump's orb photo. Or they like soccer. I don't know, but the mocking angle plays better. pic.twitter.com/MwL0e7v1Qq

Obviously, the trolling did not go unnoticed by Twitter.

The Nordic version of the Trump-Saudi glowing orb pic! ;-) https://t.co/kFQE16cui2

The Nordic trolling is just the latest rebuke from world leaders Trump received after his trip abroad last week. German Chancellor Angela Merkel said that Germany could no longer “completely depend” on the United States following Trump’s European visit.