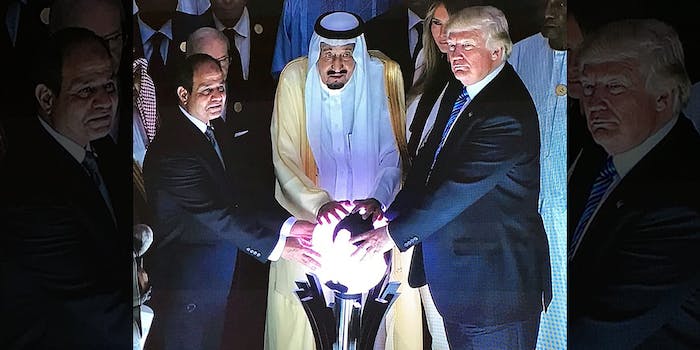 This is downright psychic.

In Donald Trump‘s 2017, we’ve long past left the surreal behind, and now are trapped in some Dadaist dream sequence, where both life and art exist on a Mobius strip of influence, with no one sure who is imitating what anymore, or whether it even matters.

When the president placed his hands on a glowing sphere in Saudi Arabia, no one was sure if this was business as usual, or if the world had entered some sort of Captain America-Twin Peaks crossover episode. It’s something no one could have seen coming, and yet, one person did predict it a week ago.

TRUMP: the pulsing orb is fantastic. my brain hums as i stroke its oily black surface, my enemies will die in rivers of blood. terrific orb!

That was tweeted over a week before the orb incident.

@Nice_mustard was bemused as hell this weekend.

how tf did this end up becoming relevant to actual events

How indeed? Twitter was perhaps even more uncomfortable about it.

THIS INSIGHT HAS UNLOCKED THE PORTAL pic.twitter.com/9Rw1tB0kYX

mustard what the fuck

it's been a weird day

In a long line of them.