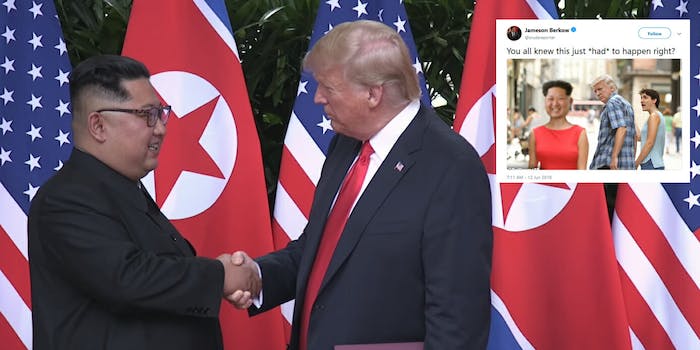 As Trump met with North Korea, the internet was memeing

The most ambitious crossover meeting?

While the historic summit between President Donald Trump and North Korea‘s leader Kim Jong-un on Tuesday may have produced an agreement that aims to denuclearize the Korean peninsula, it also was fertile ground for numerous memes.

As the two leaders met in Singapore to discuss the agreement, the internet was ablaze with memes, jokes, and comments to mark the occasion.

Of course, there was a take on the Distracted Boyfriend meme—with a hint of the latest tiff the president has had with Canadian Prime Minister Justin Trudeau.

You all knew this just *had* to happen right? pic.twitter.com/uIgeGJEoYq

And there was a reference to the “most ambitious crossover event in history” Avengers meme.

The internet also couldn’t help but take notice of Trump’s odd comment about developing real estate on the country’s beaches.

But mostly, the internet just riffed on the meeting. Many of the jokes seemed to center on the agreement the two countries signed or some of the more awkward photos taken of the two leaders.

This is the time where I’d just choose to play short handed. #TrumpKimSummit pic.twitter.com/Bl71t7cPHR

Credit: uhnonotthememes I have to post for him because he can't :( pic.twitter.com/EPxJpttkmp

The meeting may have been high-stakes, but that didn’t stop the internet from laughing the whole time.