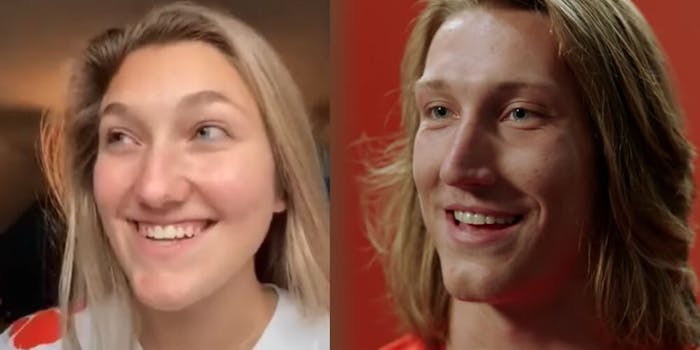 Trevor Lawrence met TikTok teen who looks just like him

The football star previously admitted that 'she does look like me.'

The internet brings us good things sometimes, like when the Clemson University quarterback Trevor Lawrence finally met his TikTok twin, a 16-year-old girl from Georgia.

Before Clemson’s game on Saturday in South Carolina, the football star met Bella Martina, the high school girl that started the trend of people sharing lookalike videos of Lawrence on TikTok.

In Martina’s viral TikTok video, she strikes different poses and then shows pictures of Lawrence in the same stance. The similarity is uncanny.

“OK I promise I’m done stealing this man’s identity,” she wrote in the caption of one of the videos.

When asked about the videos at a press conference, Lawrence said he’s seen a lot of them and thought they were funny. He specifically said that Martina “looks a lot like me” and even recorded a reaction video to one of Martina’s videos.

Before the big meetup, Martina told the Athletic that she would be nervous meeting him because she wasn’t sure how he’d react.

“I’d be like, ‘Hi! My name is Bella. You’ve seen my TikToks. We have the same face.’ I’d be so overwhelmed. I might just squeal,” she told the Athletic.