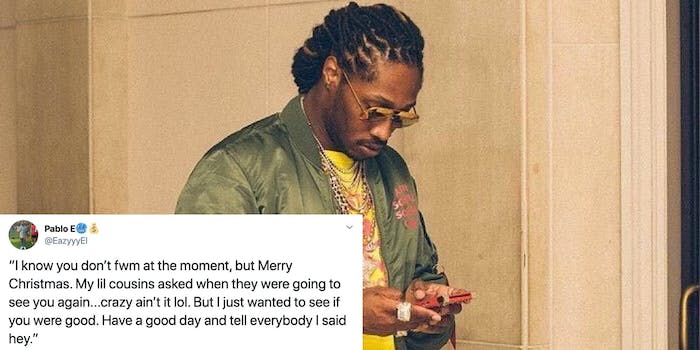 Heed this meme before sending your old flame a holiday text

'I know you don’t fwm at the moment, but Merry Christmas...I just wanted to see if you were good.'

We’re officially knee-deep in the holidays, which means ’tis the season for everyone to get in their feelings about relationships. Something about cold weather, seasonal depression, and the spirit of togetherness really makes some feel lonely. Specifically, it brings thoughts of ex-lovers to the forefront of people’s minds.

Apparently, these toxic holiday texts are so common that scores of Twitter users made them into memes. It all started around Thanksgiving of 2019, when people started mocking “I miss you” texts from ex-boyfriends. The meme texts ranged from assertive to sappy, and they all featured an image of the rapper Future, who had an infamously messy relationship with fellow musical artist Ciara.

“Happy Thanksgiving,” one Twitter user wrote. “I just wanna let you know I’m thankful for you & all the times we had. Tell your mom too. Miss you.”

Others joined in, crafting fake Thanksgiving texts with varying degrees of detail.

“Happy Thanksgiving, hope you’re well. I just wanted to say I’m thankful for everything you are. You a blessing, even when I couldn’t see that. I miss us but I see you’re happy with your new man. If you ever need a friend I’m always here. You don’t have to respond, just be well” pic.twitter.com/JmpNyhxfaZ

“Bitch I know you seen my Thanksgiving text. Quit fuckin playin wit me. Tell ya momma I said Merry Christmas and save me a plate.” pic.twitter.com/9JfhZITdwZ

“I know I’m a day late but I hope you had a happy Thanksgiving. We haven’t talked in a while but wanted to tell you that you’re one of the lessons I’m most grateful for this year. I know we lost our spark but you always in my heart, you don’t have to respond just wanted to say.” pic.twitter.com/GjHsQVdCbZ

Then, on Christmas day, Twitter users brought back the format—Future and all. Holiday text memes flourished in earnest as people made fun of ex-boyfriends who play the family card in an attempt to reconnect. Cousins, moms, sons—it’s no secret that toxic exes will use anyone as a tool to tug some heartstrings.

“I know you don’t fwm at the moment, but Merry Christmas. My lil cousins asked when they were going to see you again…crazy ain’t it lol. But I just wanted to see if you were good. Have a good day and tell everybody I said hey.” pic.twitter.com/0o9PyYxv8L

“I saw a Paw Patrol commercial this morning and it made me think of lil man. Hope you was able to get him everything he wanted. You’re an amazing mother so I know you made it happen. Merry Christmas to you and tell lil man I said Merry Christmas.” pic.twitter.com/1v52Bu3zEl

“Good morning, ask your momma if she know Mary J Blidge coming next month I know she love some Mary. Hope y’all have a good day I miss you so much Merry Christmas tho.” pic.twitter.com/VMHNZGG1tW

“Merry Christmas love.. you don’t have to reply. I have a gift for you at my house, it’s here if you want it. It’s not wrapped up but you know how we get down, ahaha..well used to but anyway.. tell your family I said hey, I know this their favorite holiday.” pic.twitter.com/WOuZnVP0Ik

Other holiday texts poked fun at exes’ more melodramatic, self-deprecating Christmas messages. One person even referenced North Korea threatening the U.S. with a “Christmas gift,” combining two memes into one.

“Merry Christmas, I know we haven’t spoken in a while,” the Twitter user wrote. “I just want you know that if North Korea gives us that Christmas gift and wipes out 38% of the US population. I miss you.”

Similar tweets showcased the angst of this classic guilt-tripping technique.

"I know I'm the last person you want to talk to, but I still wanted to be the first to wish you a merry Christmas" pic.twitter.com/IU1Cmh8yFY

Eventually, the meme evolved as people began tweeting ‘ex-girlfriend’ versions of the toxic holiday texts. Twitter users replaced pictures of Future with those of his rumored girlfriend, Lori Harvey. These ex-girlfriend counterparts featured the best aspects of the memes that came before them.

“I had a crazy dream about you last night and I needed to check on you. I know we’re not on the best of terms, but I hope you’re doing okay. Tell your mom I said Merry Christmas. Enjoy your holiday.” pic.twitter.com/pKhmIN6qny

Whether you’ve been on the sending or the receiving end of holiday texts like these, one thing is certain: Be careful about the way you handle your exes. You just might end up being ridiculed by all of Twitter at once.