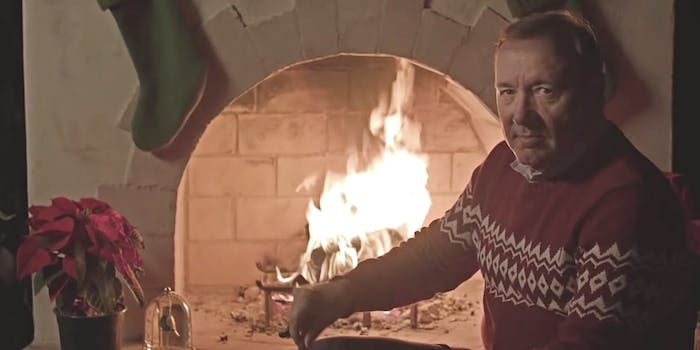 He advises viewers to 'kill people with kindness.'

Remember when Kevin Spacey posted an unnerving response to his sexual assault allegations on Christmas Eve in 2018? Well, buckle up, because the disgraced House of Cards actor is back with a sequel video. Apparently, this is not only a new holiday tradition that no one asked for but also an ongoing YouTube series.

In this new, one-minute video titled “KTWK,” the first upload on his channel in exactly one year, Spacey greets viewers from beside a crackling fire. Donning the persona and southern drawl of Frank Underwood once again, he looks directly into the camera and wishes viewers a merry Christmas. In case you were wondering, Spacey said he’s had a “pretty good year” and that he’s “grateful to have [his] health back.”

Spacey goes on to say he’s made some serious life changes. Then, in possibly the most cringe-inducing bit of dialogue of the decade, he professes his intention to “cast [his] vote for more good in this world” in 2020. This may be another attempt to undercut his current unfavorable reputation due to several sexual assault allegations. Maybe it’s simply a play on Frank Underwood’s political status. Regardless, it’s corny.

The video, unfortunately, gets worse.

Responding to disbelief from an imaginary audience, Spacey says he’s “dead serious.” Then, perhaps most disconcertingly of all, he offers the following advice to viewers: “The next time someone does something you don’t like, you can go on the attack but you can also hold your fire and do the unexpected. You can kill them with kindness.” Cue ominous music.

The use of the word “dead” here—along with Spacey’s skin-crawling pauses before and after saying “kill them with kindness”— is unsettling. One of Spacey’s accusers recently died, resulting in the case being formally dropped. While the anonymous accuser reportedly died of cancer, the morbid convenience of the situation (for Spacey, at least) spawned conspiracy theories that the actor was somehow responsible for the death.

At best, this is profoundly poor wording on Spacey’s part. At worst, this is his twisted way of referencing his accuser’s death. Either way, this carefully-crafted monologue is a truly bizarre PR stunt for someone in Spacey’s position. Since things can only get weirder from here, we’ll just have to wait to see how Spacey follows this up in 2020 with the inevitable part three.