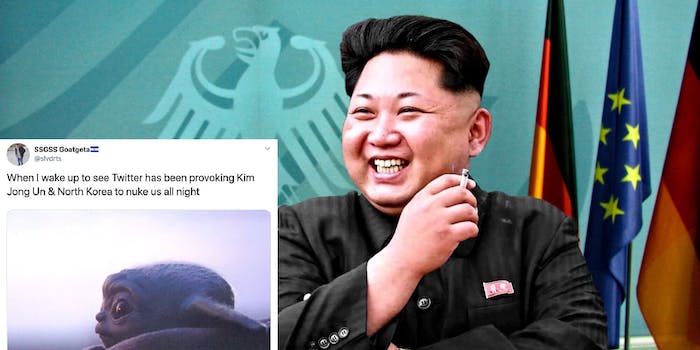 Kim Jong-un promised the U.S. a 'Christmas gift' at the beginning of December—and Americans turned the threat into Christmas Day memes.

In early December 2019, North Korean leader Kim Jong-un ominously promised to give the U.S. a “Christmas gift.” While North Korea made this thinly-veiled threat amidst tension-filled nuclear talks, it’s still unclear as to what this “gift” might be. However, North Americans are making the best of the circumstances by turning their impending doom into Christmas gift memes. After all, what better time to morbidly meme than the holidays?

Starting in the wee hours of Christmas morning, Twitter users in the U.S. and Canada started joking about North Korea bombing them. Everyone who woke up to scores of tweets about a nuclear attack was as horrified as they were amused. Needless to say, some people erred more on the side of paranoia.

me waking up to see kim jong un and #northkoreachristmasgift trending pic.twitter.com/rCho1aZhug

Me waking up to see twitter was cooking kim jong un and daring him to nuke the US all of last night pic.twitter.com/ZxYEein4La

As “North Korea,” “Kim Jong Un,” and the hashtag #NorthKoreaChristmasGift all began to trend on Twitter, several users were consumed by one question: What on earth does Jong-un think about all these Christmas gift memes?

Is he bummed because he actually wants to give the U.S. a wholesome present? Are the jokes provoking him to nuke us? Is he embarrassed by the memes? The world may never know.

everyone: he's gonna nuke us

Regardless, it seems that North Korea might have seriously overestimated people’s will to live. Some Twitter users were more than ready for Jong-un’s Christmas gift. After all, who doesn’t long for the sweet release of death these days?

Kim Jong Un: Man ahah its gonna be real funny when i say i got a present for them man ahah theyre gonna be so scared.

The US hearing they might die sooner than expected: pic.twitter.com/x0TVH9Zc6w

However, the majority of Christmas gift memes were pretty cheeky. Some Twitter users were sitting back in anticipation of America retaliating.

Kim Jong Un when we shoot down his missile and send our own back #northkoreachristmasgift pic.twitter.com/3JwvqZrq2b

all of US twitter rn because they actually woke up instead of getting nuked by kim jong un and north korea pic.twitter.com/BewOfzZwSG

me to kim jong un because we haven’t gotten our gift from north korea yet pic.twitter.com/wRMBXmbKs1

Still others were ready to throw hands with Kim Jong-un in an all-out brawl. Say what you want about Americans, but they’re bold.

However, less combative members were more interested in diffusing any possible conflict. This Twitter demographic brainstormed a variety of ways to prevent Jong-un from sending the Christmas gift altogether. Their methods ranged from creative distractions to outright begging, and some were more compelling than others.

me trying to convince kim jong un to not hit the big red button on his desk pic.twitter.com/FIz9yoQbSs

me at kim jong un's office to tell him to cancel the missile bc i just opened some really good clothes on christmas and imma need a week to wear them in public pic.twitter.com/tt3uNy39qD

Bombing memes aside, perhaps the Christmas day gift isn’t nuke-related after all. President Trump recently speculated that maybe Kim Jong-un intended to send a “nice present” like “a beautiful vase, as opposed to a missile test.” While few were convinced that a decorative vase is in store, some Twitter users began guessing at the nature of a non-nuclear gift. Might it be a Rihanna album? A new hairstyle? NSFW content on Twitter?

What if North Korea’s gift is Rihanna’s album?

The Kim Jong Un #northkoreachristmasgift is new hairstyles and not a vase pic.twitter.com/OF2esPClBn

What about that priceless photoshoot Jong-un already graced us with? No other gift could possibly compare.

Everyone seems to be forgetting that Kim Jong Un already gave us his Christmas present pic.twitter.com/aXLm3jffQI

Of course, some folks were just happy to get a Christmas gift at all.

i just wanna say thank u to kim jong un for the gift since i rarely get shit from anyone #northkoreachristmasgift pic.twitter.com/g2DPMQZCQm

While this is certainly an optimistic take on the situation, hopefully North Korea’s threat remains just that—a threat. Surely we can all do without one more present this holiday season.