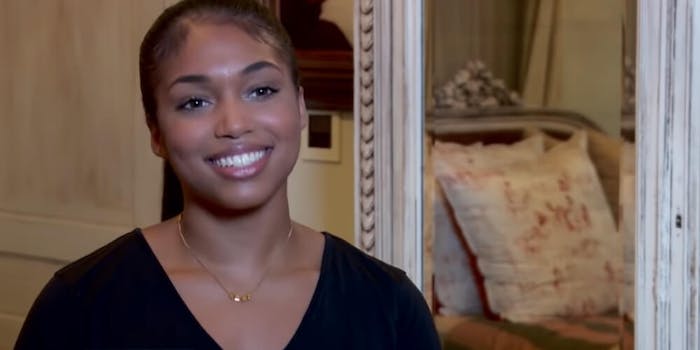 'How tf you try and flee the scene after the person you hit helps you out of your car.'

Lori Harvey, the 22-year-old stepdaughter of Steve Harvey, was arrested after a car accident Sunday night on two charges–a hit-and-run and delaying a police investigation. People are reacting to the circumstance surrounding her arrest with memes.

OK! was the first to report about the incident, which took place in Beverly Hills, California. Harvey allegedly flipped her Mercedes G-Wagon after running into a parked car while texting and driving. Harvey then attempted to flee the scene on foot but was apprehended by police nearby.

“She was arrested for two charges and released on scene,” police told OK! “Not booked. She identified herself properly and signed a written promise to appear in court.”

Police have also stated that they do not believe alcohol was involved and no injuries have been reported.

By the time the incident reached Twitter, recounts of the incident allege that Harvey fleed the scene despite being helped out of her car by the owner of the Prius she hit.  By Monday morning, Harvey was a trending sensation.

“Lori Harvey fleeing the scene of the crime,” Twitter user @DD_McC wrote, along with a meme of a woman running away from a car and screaming.

Another equated a meme of Joanne the Scammer tip-toeing away to Harvey.

Lori Harvey trying to leave the scene of the accident pic.twitter.com/JxJdSMgUkL

Twitter user @taylenspen posted a meme of a woman trying to flip a car right side up. “Bitch Lori Harvey is a mess, how tf you try and flee the scene after the person you hit helps you out of your car,” another wrote.

Lori Harvey after the person she hit helps her out. pic.twitter.com/ruI2ho2x3H

Bitch Lori Harvey is a mess, how tf you try and flee the scene after the person you hit helps you out of your car pic.twitter.com/xSjdoA51Cc

Before her accident, Harvey was already used to the trending spotlight. She has been seen on dates with a slew of famous beaus. This past summer she was said to be dating the infamous Sean “Diddy” Combs, 49, after being linked to his son.