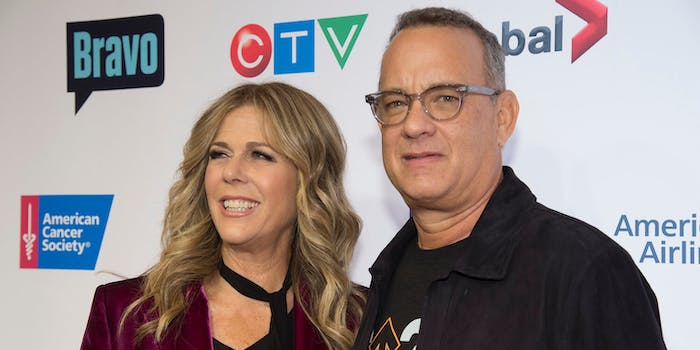 The COVID-19 survivors want to help find a 'Hank-cine.'

Tom Hanks and Rita Wilson are one of Hollywood’s most beloved power couples. Emphasis on the “power,” as both stars recovered from their bout with the coronavirus last month and have donated their blood to researchers trying to create a vaccine for the illness.

Hanks and Wilson both tested positive for COVID-19 last month while in Australia, where Hanks was doing pre-production for Baz Luhrman’s upcoming Elvis Presley biopic. (Production was halted following the diagnosis.) In a new interview on NPR’s Wait Wait… Don’t Tell Me! podcast, Hanks revealed that he and Wilson had donated blood to researchers in an effort to expedite the creation of a vaccine.

“A lot of the question is, what now? What do we do now? Is there something we can do? And, in fact, we just found out that we do carry the antibodies,” Hanks said. “We have not only been approached, we have said, ‘Do you want our blood? Can we give plasma?’ And, in fact, we will be giving it now to the places that hope to work on what I would like to call the ‘Hank-cine.’”

Hanks previously said that while he and Wilson put on a brave public face as they recovered from the virus in Australia, his wife suffered far more than he did, per MSN. “She had a much higher fever and she had some other symptoms,” Hanks said. “She lost her sense of taste and smell. She got absolutely no joy from food for a better part of three weeks. She was so nauseous, she had to crawl on the floor from the bed to the facilities. It lasted a while.”

Wilson apparently still found joy in ‘90s hip-hop, however, rapping along to Naughty by Nature’s “Hip Hop Hooray” on Instagram Live and later teaming up with the rap trio to release an official remix of the song. Between donating blood for a “Hank-cine” and dropping bars on classic rap hits, Hanks and Wilson have proven themselves exemplary COVID-19 patients.