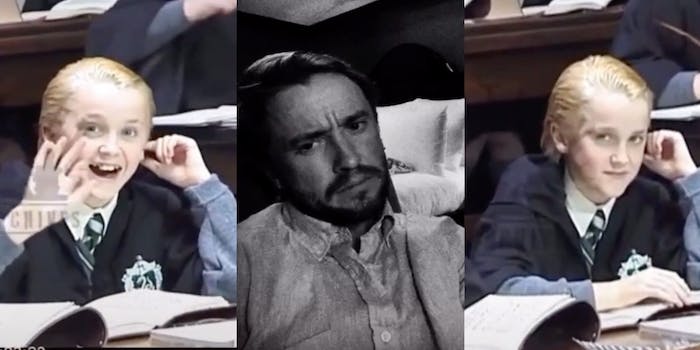 The Draco Malfoy actor has a lot to sing about.

Despite the scrutiny that Harry Potter creator J.K. Rowling has received over the years, the fictional series itself remains a nostalgic treasure for millennials. The first book was released in 1997 and the first movie debuted in 2001, forever leaving its imprint in the world of literature. The series has come to a close, but Tom Felton has plans to keep the spirit alive.

A scour through the Draco Malfoy actor’s TikTok page reveals videos showcasing Harry Potter reenactments, behind-the -scenes footage, and bloopers. The actor even hinted at a possible past crush in a video titled “Hermione to Hawaii.”

On Monday, the announcement of Rowling’s latest book, Troubled Blood, sent the internet into flames after the novel’s review revealed a problematic storyline: a murderous, cisgender man disguises himself as a woman to kill his victims. The backlash came just months after the author was critiqued for her opinion in a Devex op-ed about healthcare inequality regarding “people who menstruate.” Fans quickly labeled the series creator as transphobic after she responded to their scrutiny with: “If sex isn’t real, there’s no same-sex attraction. If sex isn’t real, the lived reality of women globally is erased.” Several Harry Potter stars, including Daniel Radcliffe, Emma Watson, and Bonnie Wright denounced Rowling’s claims. Felton has not yet made a public statement about the discourse.

Aside from clips that channel the wizarding world, Felton has a series of singing videos dedicated strictly to his love for Hamilton (or as he prefers, Hamiltom) and his talented guitar skills. Maybe we can assume the actor will be making a musical return to the film industry in the near future.