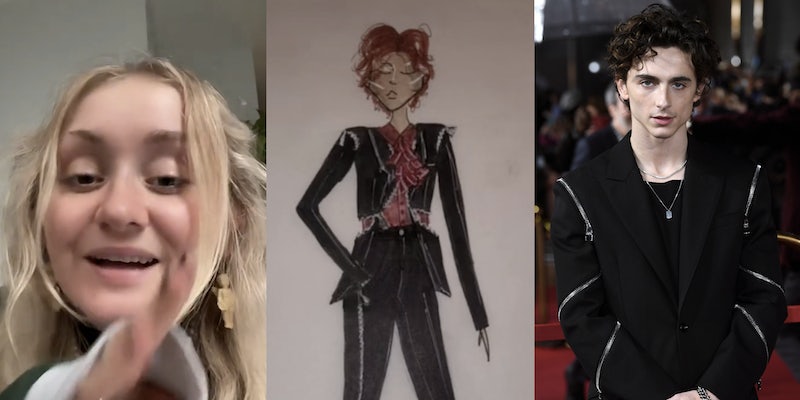 ‘I know it’s coincidental but why couldn’t it be me’: TikToker shares sketch she DMed Timothée Chalamet that’s similar to one he wore at a premiere

She emphasizes that she doesn't think anyone stole her design.

Dune’s promotional tour has had plenty of wit and charm, but one of the real stars of the tour is easily Timothée Chalamet and Zendaya’s red carpet wardrobe; neither of them is phoning it in no matter the size of the premiere. But for a fashion designer on TikTok, there was something remarkably familiar about Chalamet’s London outfit, a black Alexander McQueen suit from the Spring 2022 menswear collection adorned with zippers.

Morgan Perry, who posts on TikTok as @moperdesigns, shared a video of Chalamet at the London premiere of Dune, where he’s wearing the Alexander McQueen suit alongside her reaction to it.

“POV eating lunch at my design internship job seeing this knowing I designed an almost identical suit for him and insta messaged him a photo of a year and a half ago,” she wrote on the video. “I know it’s coincidental but why couldn’t it be me 🤡”

In a follow-up TikTok, Perry revealed both the design she sent Chalamet as well as the Instagram direct message she said she sent to him on April 15, 2020; she attributes the message to being bored and stuck in quarantine during the early days of the COVID-19 pandemic. According to the screenshot Perry featured, Chalamet never “read” the message.

Perry also highlighted the differences between her design and the Alexander McQueen suit, the latter of which she called “a little more basic.” For instance, her jacket design is different, there are more zippers, and the top had some ruffles.

In both her video and captions, Perry emphasized repeatedly that she didn’t think anyone copied or stole her design.

“All design is inspired by something and it’s very common people have similar ideas,” Perry told the Daily Dot via Instagram DM. “The point of my tik tok was I was honored he would have possibly liked my design if I were farther in my career and would have had the resources to produce it for him myself.”

Perry soon featured another design she imagined Harry Styles wearing (although she didn’t direct message that photo to Styles). And when someone suggested getting an apprenticeship with Alexander McQueen, she showed off more of the designs she made.

Despite Perry’s insistence that nobody actually stole her design, a debate about who really came up with the idea and who “invented zippers on garments” still emerged in the comments. But Perry found the upside, posting a cheeky response to how all of the discourse surrounding zippers just made her videos go even more viral.

“It was cool the look was specifically done by the brand Alexander McQueen out of anyone because that look and whole collection I designed back in 2020 was VERY inspired by my favorite runway show, McQueen’s AW 2009 collection: Horn Of Plenty,” Perry told the Daily Dot. “I had my own story and concept but I loved the dark aesthetic of it and wanted to explore that idea. All around it was a crazy coincidence and it just made me feel validated as a designer.”