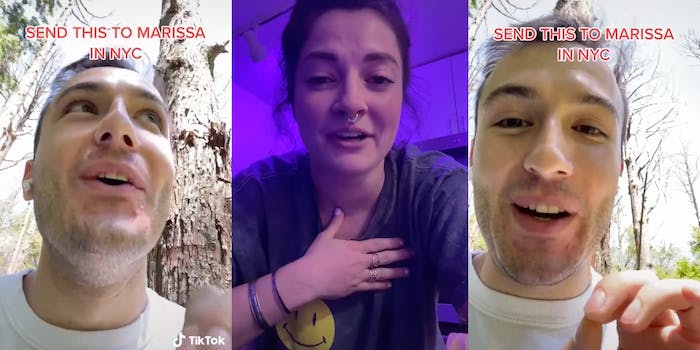 ‘The weekend you’re away is not the only time that they could do their birthday party.'

Finding out that your “friends” are talking about you behind your back is usually something limited to overhearing them yourself, or someone in your circle flipping on them and confessing all. But social media continues to connect us all in unexpected ways, as one TikToker recently proved after overhearing an unfortunate conversation in New York City.

Drew, who goes by @drewbdoobdoo on TikTok, posted a video last week calling on the power of the internet to find someone named Marissa, so he could let her know her friends kind of suck.

“I hate to be the one to stick my nose where it doesn’t belong, but if your name’s Marissa, please listen up,” he says at the start of the clip. “I just walked by your friends, and I need to tell you that the weekend you’re away is not the only time that they could do their birthday party. They are choosing to do it the weekend you’re away, and you need to know.”

Drew’s video racked up over 8 million views, and it didn’t take long for a New Yorker named @marissameizz to respond.

“In the last two hours, I’ve had over 25, 30 people send [the video] to me,” she said. “And I literally went out of town this weekend. … And one of my friends had a birthday party this weekend, and she knew I was going out of town and wouldn’t reschedule it.”

Marissa begged Drew to respond so she could get more info and determine whether or not it was her so-called friends he overheard talking about her.

“If this is about me, besties, I’m gonna need some new friends,” she admitted.

Well, Marissa did manage to meet up with Drew and determine that he overheard the conversation near where her friends normally brunch.

After everything went viral, she also heard from someone in her friend group that the person having a birthday party didn’t invite her because they didn’t want Marissa to draw focus because she’s outgoing and everyone seems to like her.

While there’s enough information for Marissa to feel confident that it was, in fact, her friends who were the ones Drew overheard that day, she said she hasn’t confronted them and hasn’t heard anything from them at all, despite her being confident they’ve all seen the video series at this point.

“The fact that I would even have the thought that it would be them from this TikTok kinda shows like what type of friends they are anyway, so the fact that this just came out of it, and I can maybe get some new friends out of it, like, I’m not mad at all,” she said in a followup video. “I’m actually kind of happy that this happened because everything happens for a reason.”

Marissa shared that she feels a little weird going viral for “having sh*t friends,” but she’s making the most of it, connecting with people across the world and even planning an inclusive picnic for anyone in New York who wants to make new friends.

And what’s more is that she and Drew have already declared themselves “besties for life” over the strange and unexpected connection—and made some really cute videos in the process.