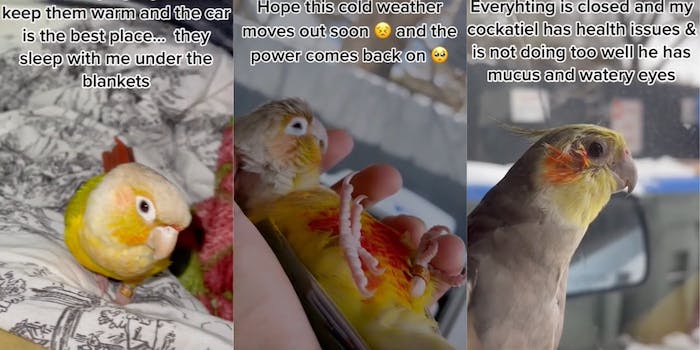 ‘Don’t know what else to do’: TikToker resorts to sleeping in car with his pet birds after losing power

'My cockatiel has health issues and is not doing too well.'

A viral TikTok video shows an Austin man who lost power during the winter storm having to resort to sleeping in his car with his pet birds to keep them warm.

The video garnered over 288,000 views since being posted by Josue Valdez (@josh_pass on the platform) on Wednesday. It shows multiple exotic birds bundled near one another in blankets. The video’s caption reads: “Just don’t know what else to do #texas #birbsoftiktok #icestorm.”

Text across the video reads, “I live in Texas and have not had power since Sunday night.”

The TikToker says he’s been attempting to keep them warm and that his car is the optimal location given the situation. He then says that his “cockatiel has health issues and is not doing too well,” citing mucus buildup in its eyes.

“Hope this weather moves out soon and the power comes back on,” text on the video reads as he is seen holding the small bird.

He later posted an update showing that his power came back on. He shows space heaters scattered to assist with the reheating. “I want to say ‘thank you’ to everyone for sending all the kind messages,” he says, before detailing his bird’s health issues.

He noted that he was on his way to locate snacks for himself and his partner in the comments.