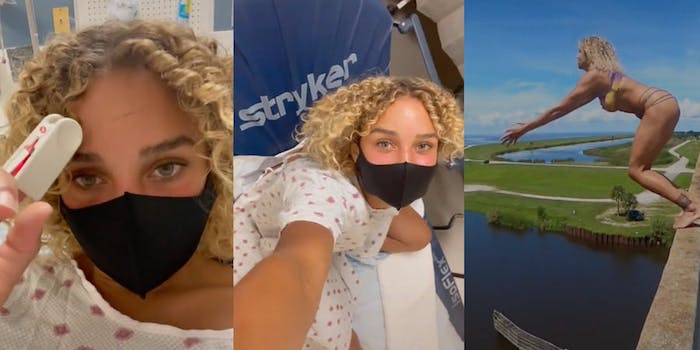 ‘New meaning to ‘tearing it up’: TikToker says she got a ‘third hole’ from diving accident

Salah Brooks, a TikToker with 5.2 million followers, says jumping from a 70-foot bridge caused her to form a “third hole.” It happened because she didn’t close her legs upon hitting the water.

The video has gained over 19 million views since being posted last week. As one viewer wrote, she gave a whole “new meaning to ‘tearing it up.’”

Brooks says the first hospital she went to for the injury “literally didn’t know how to take care” of her and made her urinate in a cup twice because they lost the first sample. The second hospital, which had “pretty little fishes” hanging from the ceiling, told her she was going to need stitches.

“It hurt so bad, I was literally crying on the table,” Brook said regarding the stitches.

She didn’t have health insurance before the incident, but she says she’s now thinking about getting it due to how often she has to go to the hospital.

But in good spirit, she named the extra hole Aspen.

After Brook called it her “third hole” though, several viewers pointed out that it would actually be her fourth hole.

“Don’t we already have a 3rd hole…?” one viewer asked in the comments. Brooks replied “yes” but made no comment as to why she originally didn’t calculate that.

Another viewer commented, “Well sounds like we need an anatomy refresher.” But someone else wrote, “3 holes might not be so bad bb.”

Others defended Brooks, saying that everyone knew what she meant even if she misspoke.

“God we all knew what she meant,” one person commented. “Hi please be safe and keep it clean.”

A different user wrote, “I laughed at ‘3rd hole’ but I’m glad you’re okay and I hope you have a speedy recovery.”

Brooks did not immediately respond to the Daily Dot’s request for comment.