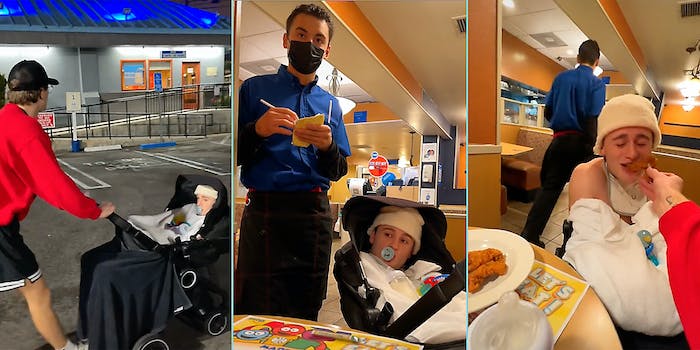 'As a waitress, if someone committed that much effort for a kids meal, I’m giving it to them.'

A viral TikTok shows a pair of influencers going to IHOP disguised as a baby and a parent to snag a free kids meal.

Their video responding to the dare, “Go to IHOP disguised as a baby and try to get a free kids meal” got over 8.4 million views and 864,000 likes since it was posted Feb. 17.

The video features O’Donnell fully decked out as a baby and Wickey acting as the parent pushing him in a stroller. Apparently, the pair managed to successfully receive a free kids meal in accordance with IHOP’s policy.

According to IHOP’s latest promotion, there is a “Free entrée valid for kids 12 and under on kids menu items, for a limited time at participating locations.”

Viewers can see the @cheekyboyos heading to an IHOP, presumably during promotional hours (between 4-10pm). A sign posted in the window indicates that the IHOP offers a “Free Kids Meal” with any adult entrée. O’Donnell is sucking a binky and hidden under a blanket.

The restaurant is empty, and the waiter doesn’t appear to be fazed as he takes their order.

The waiter even refers to O’Donnell as “the baby” at one point.

At the end of the meal, they show how they were not charged for O’Donnell’s chicken tenders. Their receipt shows Wickey’s adult order and a “KidsEatFree” write-off where the chicken tenders should be.

Many viewers found it unbelievable that the staff didn’t say anything about the “big baby.”

“no way that actually worked y’all are legends,” another wrote.

Others applauded their efforts.

“As a waitress, if someone committed that much effort for a kids meal, I’m giving it to them,” @tinasue97 wrote.

“LOL! … There’s no way they could not let ya eat free after that effort,” another said.

The @cheekyboyos’ TikTok account features dozens of videos of them taking on viewer requests. However, they revealed in a comment on the IHOP video that “This was by far the weirdest video we’ve made.”

Daily Dot reached out to @cheekyboyos and IHOP for comment via TikTok message and email.