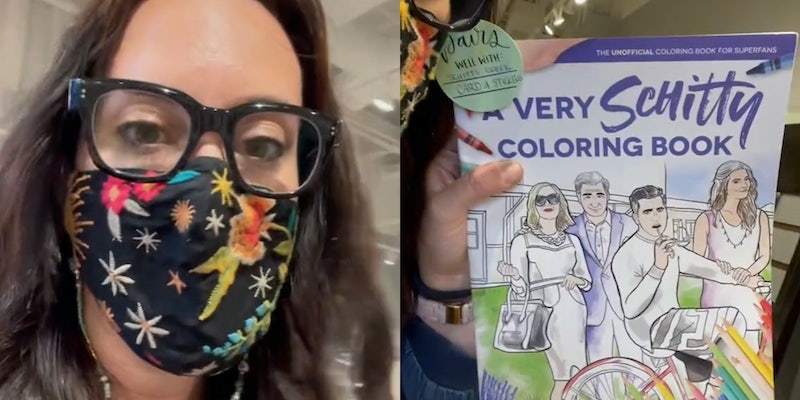 ‘They have $20,000 that they owe me’: TikToker accuses Paper Source of stealing from her small business

She says the company is withholding pay from her and other artists.

An illustrator and author has accused stationery chain Paper Source of selling her book without paying for her work, making her statement in a video that has gone viral on TikTok.

Christina Haberkern, a creator who makes coloring books and greeting cards for her company Hello Harlot, shared her grievances in a TikTok video on Tuesday which has since received more than 60,000 views.

“I’m here in Paper Source,” she says at the beginning of the video, flashing a book titled A Very Schitty Coloring Book.

“My book is still being sold in the stores, even though they have $20,000 that they owe me…from me and multiple small businesses,” she says. “But here’s my book in the store, all my product—still being sold, still haven’t paid me.”

She tagged the official TikTok account for Paper Source in the video, but it’s unclear if they have responded to her in any capacity. As of Wednesday afternoon, Paper Source was sharing various videos in their Instagram stories, but there was no mention of allegations by Haberkern.

“They purchased enough inventory from many small businesses to make sure they had enough stock for the year,” Haberkern wrote in the comments of her video. “Massive orders. Many companies suffering.”

She added in response to another commenter that the issue has been ongoing since February, right before the company filed for bankruptcy in March. Haberkern said the company placed orders with her business in January and February, and she was supposed to be paid within 60 days. However, in a follow up video, she claims that the company knew it would not have to pay back its debts after filing for bankruptcy.

The company reportedly suffered under the pandemic, and was engulfed in layoffs, store shutdowns and pay cuts, according to CNBC. In May, the owner of Barnes & Noble, Elliott Investment Management, bought Paper Source, after it filed for bankruptcy, when it was $100 million in debt.

“I’m happy to just let everyone know it’s still going on,” Haberkern added in one of the comments in her video.

Many of Haberkern’s supporters tagged Paper Source in the comments section of her video, and many even flooded the videos of Paper Source with comments demanding they pay the authors.

“Nothing more zen than…paying your bills,” wrote one user in a video on Paper Source’s TikTok about drawing zen art.

“This could go in a museum for people who don’t pay their artists,” wrote another one.

The Daily Dot has reached out to Paper Source and will update the report if the company responds. We were unable to contact Barnes & Noble. Haberkern did not respond to request for comments from the Daily Dot when contacted through her personal Instagram and that of Hello Harlot.