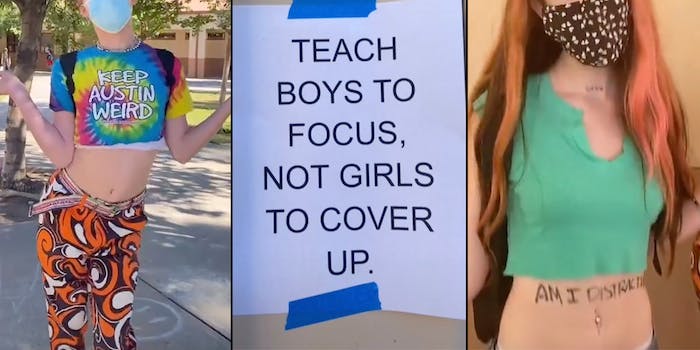 'We should not have to be kicked out of class for wearing a crop top.'

A TikToker, claiming that her school was instituting a restrictive dress code geared toward controlling what female students were wearing, documented a protest that included multiple students baring their midriffs and a walkout.

The video, from TikTok user @baggyjeanmom, has attracted more than 2.8 million views in the four days since it’s been on the platform.

The video starts with the overlaid caption, “Protesting my school’s dress code,” in the opening scene. The TikToker included an explanation in the caption, “We started this all because our principal was going to have an assembly about dress code so day of the assembly we did this. (There was a reason.)”

The TikTok shows video snippets and photos documenting the protest, including students who have written “Distraction” and “Am I Distracting?” in marker across their midriffs.

The video also includes some signage that provides pointed messaging about the protest, including one that says, “Teach boys to focus, not girls to cover up,” and another that reads, “If childrens’ midriffs distract you, you should not be working with children.”

In a follow-up video, the TikToker explained, “The reason why we did all this is because we were gonna have an assembly on the dress code. We felt the dress code was sexist towards women and also perpetuating rape culture, and that made us very uncomfortable.”

She went on to explain, “We all want some freedom of expression and freedom to express our confidence, whether that’s in a baggy T-shirt or in a tiny little tank top.” She also shared that while a favorite teacher of hers questioned their approach in protesting the dress code, he ultimately expressed support for their cause.

She highlighted one negative comment in the video that suggested students should be aware that dress codes exist in the working world.

“These little kids are gonna have a really hard time getting a job in the future,” the message tutted, “if they can’t understand the basics of dress code.”

She said, in response to that comment, “We know we’re gonna have a dress code when we get older, and possibly have uniforms with whatever job that comes, but right now, we’re in school. We’re in a learning environment. We should not have to be kicked out of class for wearing a crop top.”

A number of people chiming into the original TikTok video supported the protest. One wrote, “I don’t get how schools are going to have mandatory dress codes when we’re required by law to be there. It’s not like we’re getting paid.”

Another encouraged the protest method, noting, “My school got a bunch of guys and girls to do it. Now there’s no dress code. Keep going!”