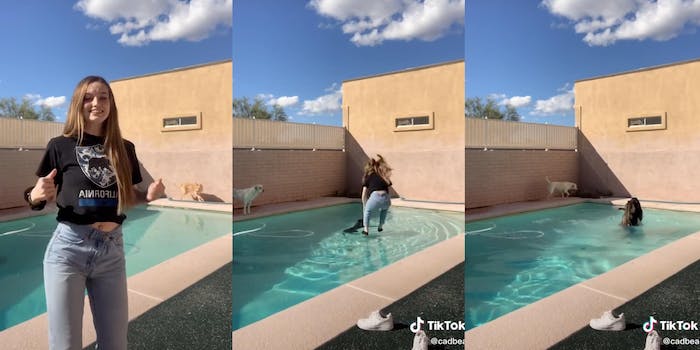 The Arizona native was fast on her feet.

A teen on TikTok has gone viral for halting mid-video to rescue her drowning dog.

Arizona native Cadence Beavers was filming a typical TikTok when everything went down. The video, posted on Sunday, shows her busting out some moves to “Gonna Get This” by Hannah Montana featuring Iyaz. In the background, two dogs can be seen vaguely wandering around a pool.

Then, the black dog—whose name is MJ—jumps into the water. Immediately, she sinks beneath the surface and doesn’t reemerge. Thankfully, Beavers is quick on her feet. As the upbeat song continues in the background, the teen can be seen speedily shedding her shoes before plunging into the pool fully dressed. Moments later, she snags the poor pup up and helps her to the edge of the pool.

The video quickly went viral on TikTok, where it has racked up more than 2 million likes so far. “Omfg saved my dog and my shoes,” Beavers captioned the video.

But some people took issue with the video. They took to the comment section to criticize Beavers for removing her shoes and checking her pockets for her phone before plunging into the pool. Thankfully, a number of other commenters flocked to her defense. “Sis saved her shoes, checked if her phone was in her pockets AND most importantly saved the dog,” one commenter wrote. “Respect.”

Most people appeared to share the sentiment. “At least u know she thinks fast on her feet,” one person said. “Bc I would be PANICKING.”

Beavers’ video collected its fair share of haters, but far more people flooded the comment section with inquiries about MJ’s condition. Don’t worry, she’s fine. Beavers gave updates on her soggy pup in several follow-up videos. In one, she can be seen snuggling a very happy—and very safe—MJ.

“Not only is my dog safe, my shoes are fine, my phone is fine,” Beavers said in the video. “I had no idea ’till that day that some dogs didn’t know how to swim, so whoever is mad because it was my natural instinct to take off my shoes before I jumped in, you can stay mad.”