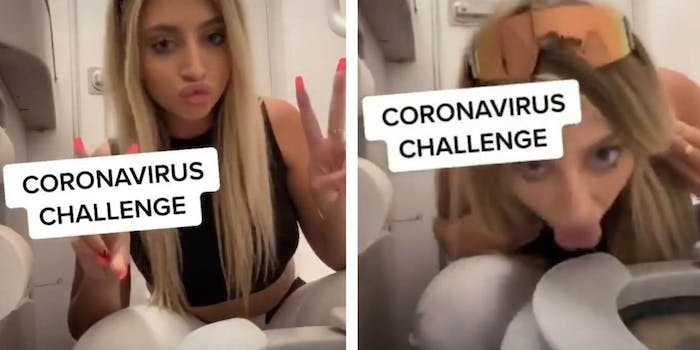 With coronavirus impacting the world and shutting down entire countries, online influencers and content creators are trying to find ways to entertain their viewers and pass the time.

But the internet is pointing at TikTok user @avalouiise as an example of what not to do if you’re social distancing: she used the #CoronaVirusChallenge hashtag and filmed herself licking a toilet seat this past weekend.

The TikTok has been deleted, but it’s been preserved on Twitter, and the video shows Ava Louise—who has more than 19,000 followers on the platform and more than 150,000 Instagram followers—looking at the camera, licking a small section of the seat, and then giving the double peace sign.

As she wrote on Twitter, “Please RT this so people can know how to properly be sanitary on the airplane.”

It was tasteless for her audience (and hopefully tasteless for her tongue as well). It’s been viewed millions of times on Twitter, and plenty of viewers had something to say about what they called a foolish stunt.

But Ava Louise, who calls herself “skinny n problematic” on Twitter and who frequently talks about how rich and pretty she is, seems to be reveling in the attention.

Since posting the TikTok, she’s been on Twitter, writing statements like “I can’t get coronavirus…..just like the gays rich blonde bitches are IMMUNE,” “Coronavirus only kills you if you use Facebook,” “I honestly ended xenophobia with my tik tok ………. everyones phobic of the white bitches now,” and “I’ve eaten a dudes ass how is this different jeez.”

She also made this social statement, writing “Ok so now that you’re all on my page—racism is bad. Gay people are good. Transphobia is grosser than me licking a toilet. Good day.”

In an Instagram story, Ava Louise said she had actually used Clorox on the seat before licking it but that after “breaking the internet,” she said she made $4,000 off the video.

Even though many people around the world have begun practicing the art of social distancing and self-quarantining themselves, it’s obvious that licking your toilet for this so-called challenge is not the way you should be spending your time—even if you’re really bored. In reality, you probably shouldn’t be licking your toilet seat ever.