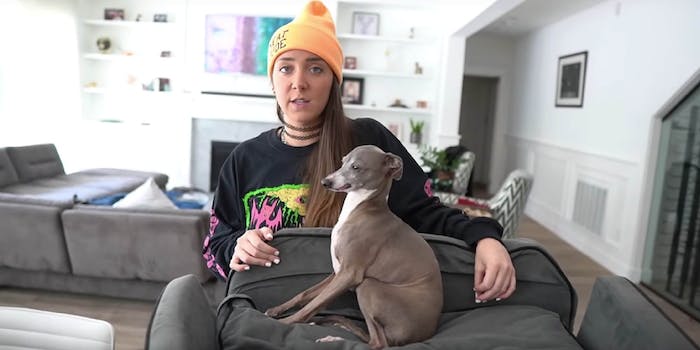 'I am legitimately angry that someone made her feel the need to apologize.'

Famous YouTuber Jenna Marbles uploaded an apology video after some people claimed she mistreated her dogs in a video reviewing a dog safety car harness.

In the recent review video, the YouTuber tested out a viral dog harness. Some viewers began leaving comments saying the dogs look stressed and uncomfortable. Marbles took the original video down and then reuploaded it with an apology and a clarification that she was not endorsing the harness.

“I was seeing some comments from people saying, ‘I don’t think the dogs should be sitting upright like that. I think it probably puts some pressure on their spine,'” she said in the updated video. “I do agree with all of you. The video is 30 minutes long, and I do spend a majority of that time sort of describing that I’m not sure this product is right for me or my dogs.”

She said she was not endorsing the product in any “way, shape, or form.”

Fans of Marbles, who has achieved her YouTube fame partly because of her dog videos, were quick to come to her defense.

Twitter users seem to be overwhelmingly in support of Marbles. Many fans shared video clips of her interacting lovingly with her dogs.

“Please believe that I would never put my dogs in a stressful situation,” Marbles said in the video.