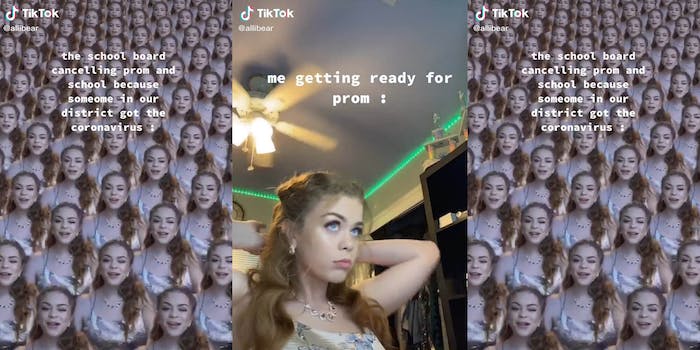 Prom might be canceled, but TikTok Teens have backup plans

Students were upset, but worked out ways to prom from home.

The worldwide cancelations due to coronavirus continue to stack up, but for teens on TikTok, it’s prom possibly being canceled that’s creating drama. And content.

As schools started canceling classes over the last couple of weeks, and extending spring break, high school students apparently started to realize that prom might be canceled, too. Know Your Meme points out that in early March students started posting #promcanceled videos to TikTok, lamenting the cancelation of the event during a global pandemic.

Students were upset by the news, but quickly worked out prom from home (PFH) options.

Actor Matthew Lillard also got in on the trend, responding to someone asking to borrow his suit from 2002’s Scooby-Doo for their prom with “I would’ve… Prom got canceled?”

Some teens suggested doing their own proms, though the World Health Organization, which recently joined TikTok, would highly advise against that.

Some teens are taking important steps now in case their graduations are also canceled.