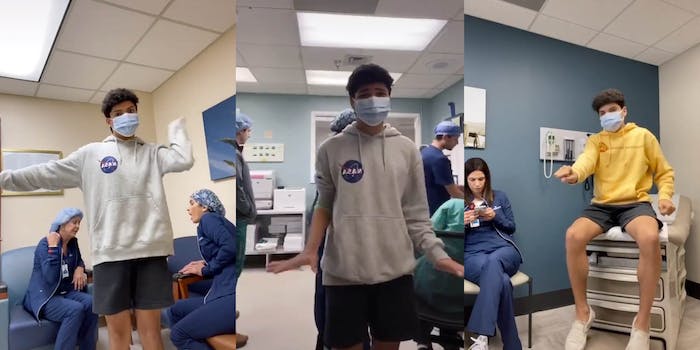 It's unclear if it's even a real test, but that hasn't stopped its virality.

A teen’s documentation of his alleged “coronavirus testing” on TikTok has gone viral. TikTok user @yahomeboiigc, who goes by Giancarlos Coris on Twitter, says he recently got tested for the coronavirus. The rapidly spreading virus was recently declared a pandemic by the World Health Organization (WHO), so the need for a test is typically approached with some degree of fear and anxiety.

Coris had his own approach.

He uploaded a video to TikTok of himself, face mask in place, quietly dancing while medical staff milled about behind him. The song “Don’t Start Now” by Dua Lipa served as a soundtrack. The combination of coronavirus and TikTok, two of the most talked-about things in 2020, resulted in an immediate viral hit. “I don’t think a video could define our generation better than this kid making a TikTok while being tested for corona,” Twitter user Eric D. wrote.

A few people questioned the authenticity of the video, particularly considering how unconcerned the medical staff in the background appears. Others flagged it as looking “unnatural.”

Coris posted other similar videos in the hospital that could very well be green-screened, too. “I may be sick, be still do be vibin doe,” he captioned a video of himself busting out some moves very near the personal space of several medical professionals.

Another video soon followed. After his testing was complete, Coris provided an update. “I DO NOT HAVE THE CORONAVIRUS,” he wrote alongside another video. “But the doctors still don’t know what’s going on (I just wanna go home).” In each of his hospital videos, Coris can be seen busting out some dance moves in front of irritated-looking medical staff.

Another update on Thursday informed viewers that Coris is still recovering from his mystery, non-corona-related illness, but is feeling better. He’s been continuing to joke about his experience via his Twitter page.

“Goodmorning, it’s a beautiful day to cough on some strangers,” he joked this morning.

His jokes might not sit well with everyone, but Coris has kept his sense of humor through it all.