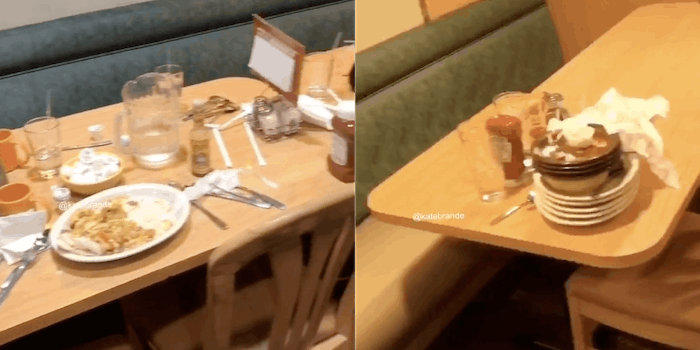 Waitress illustrates the difference between boomers and Gen Z on TikTok

This video says it all.

The feud between Gen Z and boomers has been going strong for years.

Or maybe it’s only been a year. Who even knows what time is anymore?

Regardless, the dispute has taken on new energy in the last several months. Thanks to a recent TikTok shared to the platform by 18-year-old Kaitlyn Brande, we finally have a clear illustration of the (alleged) differences between these generations.

The short video is enlightening. Unless, of course, you’ve ever waited tables before. In which case it is exactly what you’d expect.

The video shows two recently vacated tables at a restaurant. Brande, the server for both tables, can be heard speaking in the background of the TikTok. “Here’s all I’m saying,” Brande begins. “This is a table of five boomers that I took some plates out of the way already.” As she speaks, Brande reveals a messy table scattered with used napkins, dirty plates, and strewn silverware.

Then, the camera shifts to a much tidier table. “And then this is a table of six Gen Zs,” Brande says. She indicates a tidy stack of plates situated next to all of the table’s used cups, napkins, and silverware. “They did that,” she continued. “Just sayin’.”

The caption for the video says it all. “They get paid to do that’ VS ‘we know restaurant life is hard, here, let us help you out.'”

The simple video purports to illustrate the difference between how many boomers treat service industry workers, as opposed to younger generations. In an interview with BuzzFeed, Brande explained her motivation behind posting the video.

“I posted it because I thought it was ironic since older people always expect respect,” she said. “I’m not saying I expect people to ever stack their plates like that, because hey, I’m a person too. I want to go out and eat and not worry about the dishes or anything. All I’m saying is it was cool and helpful of the younger people, and I appreciated it.”