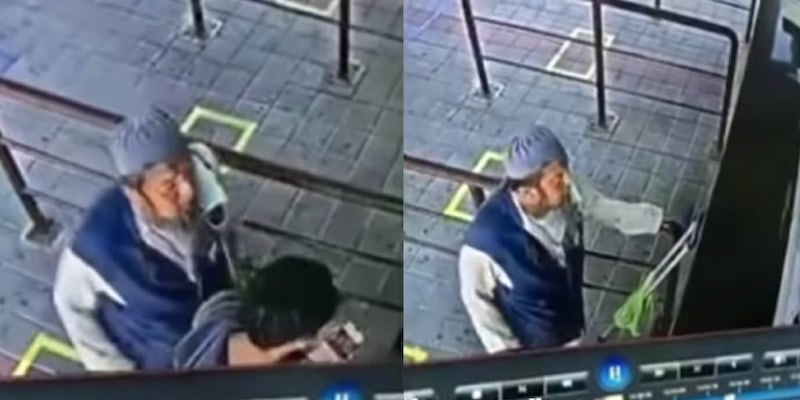 He was found dead on the train.

A man who had the coronavirus can be seen in surveillance footage spitting in another man’s face. The man died on the train shortly after, according to the New York Post.

The incident occurred at a train station in Bangkok, Thailand. In the footage, Anan Sahoh, 56, can be seen walking with a crutch toward an unsuspecting, unidentified man, who was in line to buy train tickets. Sahoh is seen ignoring the social distancing line markers on the ground to approach the man, who is looking at his phone, and seemingly deliberately spits in his face before walking away.

Sahoh was found dead on the train on Tuesday. After his death, he was tested for the coronavirus and confirmed to have it.

Sahoh did not have a temperature when he boarded the train.

Between Bangkok to Narathiwat, the train’s destination, Sahoh reportedly developed a cough and began vomiting. He was advised to get off at Hua Hin, where the train stopped along its route. But his health reportedly improved by the time it arrived at the Hua Hin station. His temperature was reportedly taken again, and he didn’t have a fever.

He refused to get off and rest at the Hua Hin station as advised and later fatally collapsed in front of a toilet on the train.

The train was reportedly disinfected, and officials quarantined 11 people who were on board and may have been exposed to the virus. Thakoon Intrachom, the director of Thailand’s State Railway, said officials are now trying to track down the unidentified man.

“We are now worried about a man that was spat at in the security camera footage,” he said, per the Post. “Initially, we coordinated with the railway police but they have not found him yet. We want to announce that if anyone knows him or if he has heard about the news, then he should please go to the hospital immediately.”

As of Tuesday, Thailand had 1,524 confirmed cases of coronavirus and nine deaths.