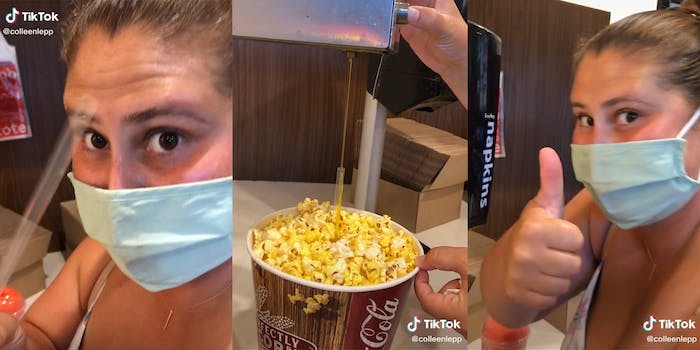 ‘The one true life hack’: TikTok hack for buttering popcorn blows up—but not everyone’s a fan

Emergent technique lauded as a game-changer.

Unevenly buttered popcorn may become but a memory, as a viral TikTok reveals a new way to butter your movie theater snack simply using a straw. But, critics say, the method isn’t as effective as advertised.

“I love buttered popcorn, but I hate when the butter is only at the top,” TikTok creator Colleen Lepp says in the video.

Lepp sticks a plastic straw in the center of her bucket of popcorn, lining it up with the butter dispenser. She then presses the button, and butter flows down the straw into the lower portion of the bucket.

“It takes a minute lining it up, but once you do, you are good to go,” she says.

“This is something my aunt taught me when I was really little and I’ve been using it ever since,” she says, throwing a thumbs-up to the camera. “Let me know if it works for you. Good luck.”

Some commenters said this was their tried-and-true method for popcorn buttering.

“The one true life hack!” one user said. “I put 3 different straws at different sections and heights to get butter in all the levels.”

“Omg I always do this and people look at me like I’m crazy!” another said.

However, the hack proved disastrous for some who had tried it before.

“I did that and it stained my clothes because the butter seeped through the bottom,” one user said. Others responded by suggesting she cover the bottom with a plastic bag or paper towels to avoid spills.

A few commenters suggested that Lepp ask the employees to layer in the butter as they scoop the popcorn, but Lepp said her theater doesn’t allow that anymore due to their COVID-19 restrictions on excessive food handling.

Other users pointed out other places they had seen the buttering method before, including on the YouTube channel Dude Perfect and the Netflix comedy show Unbreakable Kimmy Schmidt.

While this handy hack may rid you of unflavored popcorn, one thing is certain: Extra napkins are a must.