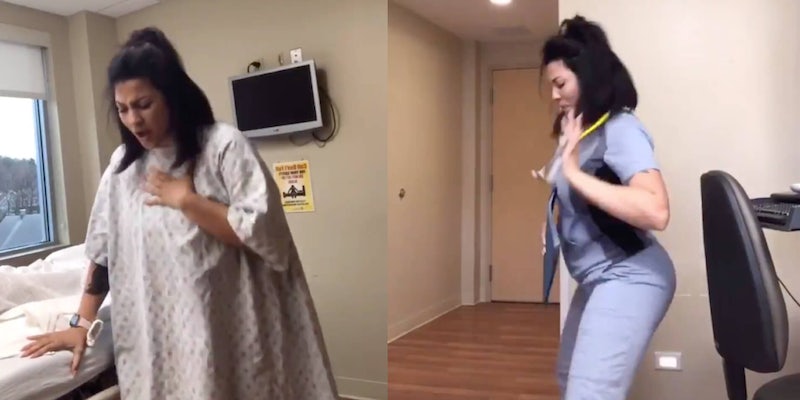 Nurse’s TikTok video accused of being insensitive to patient trauma

'This is a terrible take.'

Trends and viral challenges are often behind a TikTok video‘s rise to virality. Sometimes, however, a creator manages to make something wholly unique, that captures our collective attention even without a trending hashtag. And sometimes, it’s not a good thing.

Such is the case with a recent TikTok from a nurse, uploaded to Twitter on Tuesday, where it was promptly dragged by half of the internet.

The TikTok is pretty simple. It shows Danyelle Rose, a former Vine star who has transferred her popularity into TikTok, in a hospital gown. Clearly intended to portray a patient, the gowned Rose gasps for air. Then, a version of Rose in scrubs—clearly a nurse—begins to dance to the sounds of the patient’s “suffering.” The video is captioned with “We know when y’all are faking.”

The video quickly gained attention online, particularly from people who felt their medical struggles have been ignored or minimized by hospital professionals. “Someone notify me when she gets fired,” one commenter wrote. “This is trash.”

Most people tended to agree. Especially because Rose’s TikToks indicate that she’s actually a professional nurse.

Your job is to help people based on the symptoms they present.

Your job is NOT to withhold medical care because you’re a detective and can distinguish between a myriad of symptoms to determine real from fake.

I was seconds from fainting when a female "medical professional" like this, ROLLED HER EYES. I honestly think that was the only thing that kept me from dropping because she enraged me. It took them 3 days to regulate my heartrate after they realized I was actually in crisis. smh

*The nurse while Serena Williams almost died after giving birth

Many people shared medical horror stories of times they’d visited a medical professional and been brushed off. Most unanimously agreed that Rose’s TikTok was a singularly bad take. “My mother had to have 2ft of her small intestines placed back & was near death because of an undiagnosed hernia rupture,” one commenter shared. “She went to the doctor a year earlier complaining about the pain & they didn’t believe her.”

They were far from the only one.

Despite all the anger, there were those who defended Rose’s video. “People are really offended by this tweet,” one commenter said. “You gotta walk on eggshells in this generation. Reading the comments this went from a joke to ‘black woman (sic) die in labor all the time because of people like this’ I wasn’t even thinking that deep.”

Every one of us who has had a nurse ignore or insult us is the butt of this joke. I've been left sobbing w/o pain meds after surgery & the nurse who laughed at me as I cried all night tried to get me to take her side when the dr pointed out pain meds had been ordered on my chart.

Much of the anger Rose’s tweet received came after she played coy in the comments section. Despite all the anger her TikTok stirred, Rose appeared to make light of many of the stories shared in the comments. That also upset people.

Thankfully, a few good things came from Rose’s TikTok. One Twitter user even said the video encouraged her to “not quit school, because the world needs more compassionate nurses.” Another user shared a thread of people who’ve previously been denied medication or treatment they sorely needed.

Please listen to patients. Even if you feel we MIGHT be lying, check us out anyway to be 100% sure.
Research endometriosis. I have had so many horrible nurses treat me like hell because of it.

Thank you for caring.