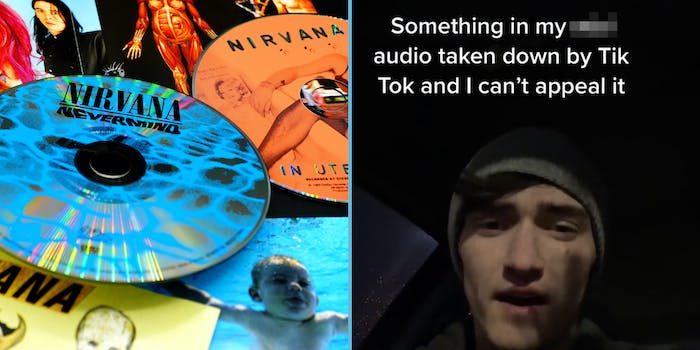 ‘A lot of people really enjoyed that audio’: TikToker says his Nirvana parody song was taken down

The audio is a riff on 'Something in the Way,' which recently appeared in 'The Batman.'

Update 1:11pm CT, March 23: On Tuesday night, sansmoney made a new video informing his followers that his audio had been restored. As a result, he deleted his initial rant.

“It’s great that they put it back up, but that doesn’t exempt them from a lot of criticism that I have with the community guidelines and their management,” he said. Our original article is below.

The Batman sparked many things, but chief among them was the resurgence of the Nirvana song “Something in the Way” (which is featured in the film). Naturally, the next step is a parody, but on TikTok, one such parody is alleged to have been removed from the platform for violating community guidelines.

The parody was first uploaded by TikToker @sansmoney on March 10, close to a week after The Batman’s release, according to Know Your Meme. The rather crude parody has sansmoney sitting in a car and turning the steering wheel. With “Something in the Way” playing in the background, he says, “Something’s in my ass, mmmm” and starts to shake when the latter lyric appears.

The caption reads, “me driving to work after shoving my Batman action figure in my butt.”

The original TikTok has been viewed more than 1 million times, with many people creating their own versions using sansmoney’s audio; enough people made their own version that a nearly 11-minute compilation video ended up on YouTube. The audio was named “Something’s In My Add,” a less explicit version of what the lyrics are saying.

But a couple of days ago, sansmoney says that TikTok took down his audio because it violated TikTok’s community guidelines and that he wasn’t given a chance to file an appeal. In his video, he doesn’t say which guideline he violated, only that it “didn’t make any sense.” In an Instagram dm, sansmoney said that “The only reason given for the sound being removed was ‘Tik Tok Community Guidelines'” and added that while he’s had videos taken down before, this was the first time that TikTok only removed the audio.

“That audio was removed from TikTok due to community guideline violations,” he says. “I can’t appeal it, and all the videos under that audio, for all that I know, all of them are gone. I’m extremely frustrated with this because this isn’t the first time that this sort of thing has happened. I don’t think I need to go into detail why TikTok took it down was really, really stupid and didn’t make sense. I’m seriously considering switching platforms because it’s getting extremely frustrating trying to battle with this sort of stuff.”

While sansmoney’s original video is still on TikTok, when you click the “Something In My Add” audio link, no videos are listed. Instead, you’re met with a page that says “This sound isn’t available.” sansmoney also pointed to someone who ripped his audio (and named it something else entirely), which has yet to be removed by TikTok.

Screenshots shared with the Daily Dot illustrate sansmoney’s differing experiences with community guideline violations. In the violation sent with a removed video, the ability to appeal appears at the bottom of the message. For the audio removal, that isn’t the case; the area is left blank. But even when appealing a community guideline violation is possible, sansmoney compared the process to flipping a coin.

“I could get a video taken down that I fully believe could be appealed, but it would get denied and deleted,” he said. “I made a video where I fake trip over a metal trash can and the video was removed due to ‘Dangerous Acts.'” (A version of that video still exists on TikTok as a duet with himself.)

He’s since uploaded the clip to Instagram and has expressed his reluctance to continue making videos on TikTok due to the constant worry of making content that could be taken down but also detailed the struggle of having to start from scratch on another platform.

“It’s gotten to the point where I hate putting effort into something and having the fear if it’ll get taken down or not,” he added. “It’s awful, it’s really awful, and I’m really upset that, a lot of people really enjoyed that audio. There was a lot of videos under that audio and all of them are gone because of community guideline violations that don’t make any sense.”

He said that while other TikTokers have been supportive of his current issues with TikTok, it’s something that many creators are more than familiar with.

“This has been extremely common and very frustrating for not just me but many other creators as well,” he added in a direct message. “I make comedy content on Tik Tok but my heart really goes out to people who try to send important messages across Tik Tok who are silenced due to unclear or poorly enforced community guidelines.”

The Daily Dot reached out to TikTok for comment.