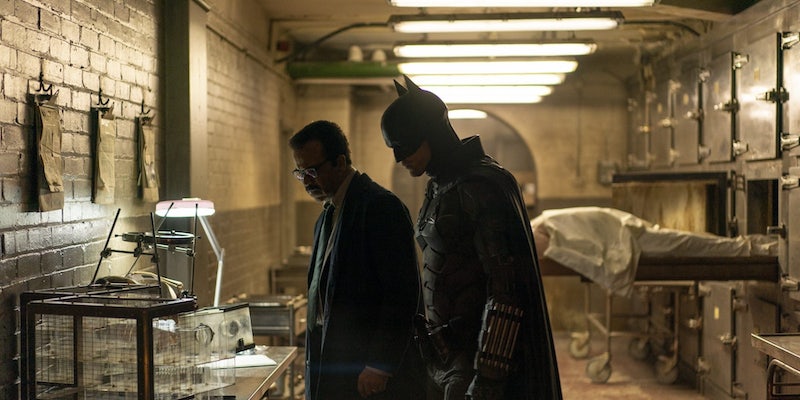 Review: ‘The Batman’ is barely a reboot

The Batman franchise’s quest for realism continues in Matt Reeves’ new reboot, a 3-hour crime drama taking cues both from classic comics (Batman: Year One; The Long Halloween) and gritty 1970s thrillers like Taxi Driver and Klute. The Penguin is now a generic mob boss. The Riddler is a politically-motivated serial killer. Much of Gotham’s theatricality has been sacrificed on the altar of Seriousness—a continually puzzling direction for the franchise, because if Batman isn’t surrounded by operatic freaks, then what’s the point?

Release Date: March 4, 2022
Director: Matt Reeves
Robert Pattinson stars in this new reboot of the Batman franchise, a neo-noir crime thriller featuring the Riddler (Paul Dano) as a serial killer. It’s a new, more mature vision for Batman—but with a 3-hour runtime and rather shallow characterization, it outstays its welcome.

Robert Pattinson offers a fresh-ish take on Bruce Wayne: A young, awkward recluse with no public persona to speak of. At home in his vampiric lair (Wayne Manor has been replaced by an apartment made from recycled Gothic cathedrals), he lurks around with smudged eyeliner and unwashed bangs, ignoring Alfred’s pleas to participate in the family business. He interacts with the city exclusively in his guise as Batman, which is just as well because if young Bruce was a tabloid fixture, people would recognize that crisp jawline in a heartbeat.

Since this version of Bruce Wayne is neither a philanthropist nor a businessman, the film explicitly teases one of the more annoying critiques of the Batman mythos: Wouldn’t it be more effective to just donate his fortune to charity? There are plenty of ways to poke holes in this argument, but on a macro level, the answer is obvious: If Gotham’s problems could be solved with money, then we wouldn’t have a story.

While the city’s criminal ecosystem thrives on corruption and poverty, Batman’s biggest foes are invariably fueled by madness. So when you start connecting them to real systemic problems, you get dangerously close to Batman’s narrative third rail. In the same way that Joker tried to diagnose its title character with a realistic mental illness, The Batman swaps the Riddler’s zany puzzles for grisly domestic terrorism. Inspired by the Zodiac Killer, he’s now a serial murderer targeting Gotham’s elite.

Lieutenant Gordon (Jeffrey Wright) invites Batman to assist in the investigation, setting the tone for a neo-noir procedural drama—more cerebral than previous Batman movies, without necessarily being smarter. Surveilling the mobsters Carmine Falone (John Turturro) and the Penguin (Colin Farrell, in a wildly unnecessary amount of makeup), Batman spends more time doing detective work than beating people up. Matt Reeves’ action sequences are noticeably above the blockbuster average though, both in a technical sense (they lack the weightless CGI sheen of Marvel Studios fare) and in what they’re trying to communicate. Pure spectacle wouldn’t be appropriate for this murky tale. Yes, the fight choreography is great, but the focus here is on physical impact and atmosphere, with one long chase sequence filmed (for better or worse) through blurry sheets of rain.

Along the way, Batman meets nightclub waitress Selina Kyle, aka Catwoman (Zoë Kravitz). Kravitz is very well-cast as this cynical femme fatale, although she’s let down somewhat by the script. Despite a very direct moment where Selina calls out the white male privilege of Gotham’s leadership, Reeves and his co-writer Peter Craig seem unaware of their own blindspots. Selina is the lone female character in a sea of men, making it clear whose perspectives are prioritized. The only other woman of import is a mayoral candidate (Jayme Lawson), who plays an important symbolic role (a principled Black woman standing against Gotham’s corrupt establishment), but has barely any screentime compared to Falcone, Gordon, Alfred, etc. Meanwhile, the moral conflict between Bruce and Selina takes on a frustrating edge.

Batman and Catwoman traditionally have a push-pull dynamic, drawn to each other by sexual tension and shared experiences, but separated by their differing attitudes to crime. He refuses to kill, while she has a more flexible attitude to retribution. So far, so good.

In The Batman, however, this conflict veers more toward Bruce imposing his morality over Selina. This makes it increasingly hard for us to root for them as a couple—a problem that might have been solved by ramping up the horniness. Pattinson and Kravitz are beautiful people, positioning Catwoman’s sinuous sex appeal opposite a more sensitive, downbeat Batman. But in keeping with recent Hollywood trends, The Batman tones down the chemistry, paling in comparison to Michael Keaton and Michelle Pfeiffer in Batman Returns. Bruce and Selina are surprisingly chaste for The Batman’s otherwise adult tone, which skirts the edge of its PG-13 rating in terms of violence, opening with a gruesome Riddler murder.

If I seem overly down on The Batman, it’s because I truly feel like this film could’ve done more. Pattinson is one of the premier weirdos of his generation, yet The Batman restrains him and his co-stars into generic crime drama roles. And while Paul Dano’s Riddler is a major departure from previous iterations, he’s a Hollywood serial killer cliché: a nerdy loner who crafts sadistic puzzles to terrorize the cops. As ever, this trope acts as a perverse kind of fantasy. What if creepy school-shooter types were actually fascinating masterminds, and the only way to defeat them was with an equally clever detective?

You can see why Warner Bros. was happy with this idea. Technically speaking, we’ve never seen a Batman movie like this before. At the same time, The Batman is still very conservative. No stylized shadows or quirky costumes here. A narrative that fits closely into familiar tropes about crime and punishment, starring a stock cast of cops and gangsters. Another reboot of Bruce Wayne as a rageful loner, rather than (as in the comics) a hero with a family of interesting protégés. The most effective element of this new Gotham is its looming sense of societal collapse, which feels palpably relevant even when the plot rehashes old territory.

When superhero directors cite legendary filmmakers like Hitchcock and Scorsese as inspiration, it’s always interesting to see what this actually translates to onscreen. Joker, for instance, was a direct ripoff of Taxi Driver and The King of Comedy, whereas Captain America: The Winter Soldier only had vague similarities to 1970s espionage thrillers like Three Days of the Condor. The one thing these films all have in common is how shallow they feel when compared to their vintage counterparts.

The Batman is an hour longer than Klute or Taxi Driver. However, its characters are simpler, its outlook is more derivative, and it has far less to say about human nature. By contrast, the best superhero movies succeed because they’re doing their own thing: Batman (1989), Black Panther, Logan, Spider-Man: Into the Spider-Verse. For the most part, The Batman is a skillfully-executed retread. Blending neo-noir elements with our post-Dark Knight expectations for Gotham City, it caters to an audience who like to see Bruce Wayne be violent and troubled—with as little eccentricity as possible.