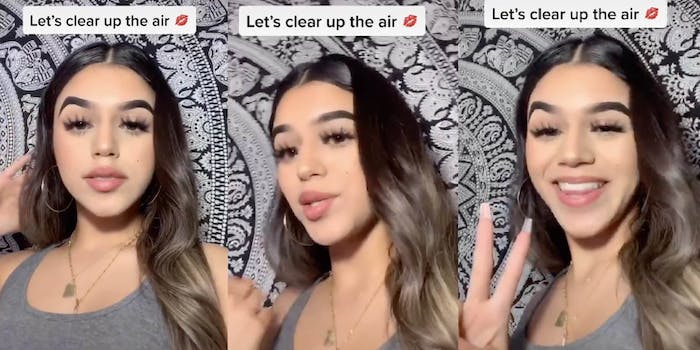 'Why do you think that word's OK to use?'

A teen TikTokker lip-synched the N-word in a TikTok and then laughed at people who tried to explain to her why the word was offensive.

The TikTokker, who is Chicana, lip-synched the N-word as she danced to an unreleased Doja Cat song. She later re-uploaded the video without her lip-synching the word with the caption, “Let me remake this [because] y’all were upset.”

After she posted the video, she received a lot of heat for singing the word, but the TikTokker continued to defend her decision to use it. She participated in a series of live streams with other TikTok users, mostly Black teens, who explained that she shouldn’t use the word because of the historical significance and because she’s not Black.

But in at least two of the live streams, the TikTokker laughs as Black teens explain why her using the word is offensive. She laughed as one TikTok user said that the word has been used to “dehumanize my people.”

“Why do you think that word’s OK to use? Because you know that word is not OK to use to somebody, but you keep using it in general. And then you keep laughing,” one TikTok user said to her in a live stream.

The teen who posted the video said, “This is so funny to me.”

In another live stream, a TikTokker explains why the “whole Black community is mad” about her decision to say the word and then defend it. The girl who posted the video responded saying, “It’s funny that you’re mad.”

Clips of the live stream are circulating online. In them, the only excuse she gives for why she should be able to say the N-word is that “it’s 2020.” She also lists people, like her friends, who think that the situation is funny and that it’s OK to say the word as “long as you’re not white.”

“This little girl was laughing in her face while she was trying to explain why her using the N-word was offensive,” Twitter user @wavyemma wrote. “This is why the term ‘POC’ and ‘Black’ are not synonymous.”

Throughout the drama, the teen continued to climb in followers. She now has over 100-thousand followers and 1.4 million likes on her videos.