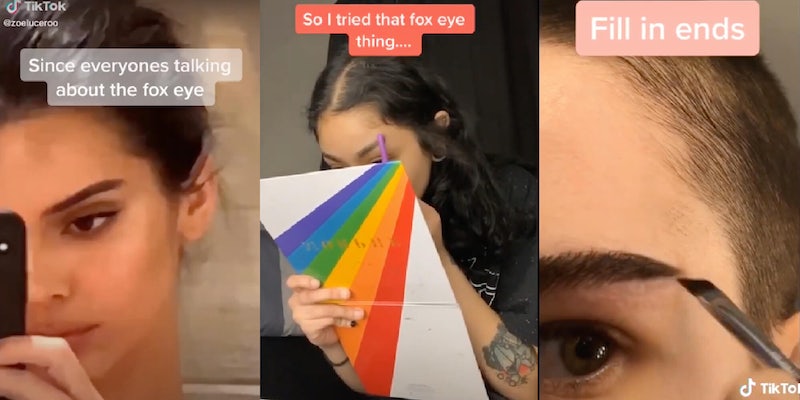 TikTok’s ‘fox eye challenge’ called out for being racist

'Is being Asian a trend now?'

TikTokers are continuing to shave off part of their eyebrows for the “Fox eye challenge” during quarantine. Now, the backlash has arrived, as the trend is being called out for its racist undertones.

On the app, users are attempting to obtain a “fox eye” look similar to that of models Kendall Jenner and Bella Hadid. They do this by shaving off the tails of their eyebrows with a razor and then drawing new tails on much higher and straighter.

TikTok star Melody Nafari garnered over a million views after posting her “fox eye challenge” video. A follower then explained to Nafari why this trend has racial implications. “I remember when I was in primary [school] people were making fun of Asian eyes doing this,” the follower wrote. “Now it’s a trend.”

TikTok user Melissa (@chunkysdead), who is of Asian-American descent, also spoke out against it. She expressed her discomfort, explaining that the trend is similar to when people pull their eyes back to mock Asian people.

The South China Morning Post spoke with a student at the University of California, Davis, Kim Hee-Jae, who said, “Is being Asian a trend now? It kind of feels like it is. … The fox eye thing itself is probably just an aesthetic, like a beauty trend, not racism. But it doesn’t mean that we [the Asian community] don’t feel slighted. They used to insult us for that.”