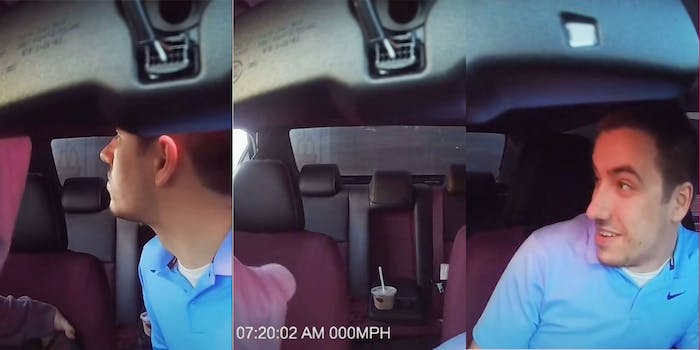 'In case of a shooting, always finish your cookie.'

A TikToker found himself in the middle of a McDonald’s parking lot shootout while sitting in his car and eating with a friend. He did what many might ascertain to be the right thing in his situation: Stay low, keep the camera rolling, and continue eating the cookie in your hand, because after all, it’s a cookie.

The video comes from Tyler Newell (@tyler.newell), who posted to the platform on Saturday and had already racked up more than 11 million views by Monday morning.

The video starts with a dashboard cam view of Newell and a friend, sitting in the McDonald’s parking lot. The time stamp on the dashboard cam indicates it was recorded Friday morning.

At the start of the video, a police vehicle is visible in the background driving past their parked car, followed by a man holding a gun and the unmistakable popping of a gun being fired. That leads Newell to exclaim, “Oh my fucking God, dude.”

Then, as they both duck down, Newell takes a bite of his cookie. (Indeed, Newell captioned his video, “In case of a shooting, always finish your cookie.”)

The dashboard cam video then jumps ahead about a minute, with Newell’s friend asking if they should try to move, and Newell pointing out, “We’re in the line of fire.”

He then notes that the back passenger side window is open, and leans toward the controller on his door to close it.

The clip concludes with Newell and friend, heads ducked down, slowly backing the car out of its parking spot, with the Mission: Impossible theme added for comedic effect.

The video received additional exposure through Reddit’s r/PublicFreakout subreddit. A commenter there observed, “Sonic commercials are getting weird,” which led another Redditor to respond, “No, that’s a commercial I’d watch.”

In a pair of follow-up videos, Newell explains what exactly went down in his fateful TikTok. He and his friend, Zach, were going to play a round of golf. They arrived early and decided to get some breakfast, and after some deliberation, settled on McDonald’s over Chick-fil-A, “because Zach had some coupons.”

While they were eating in the parking lot, they saw a cop drive past them and looked over to see “like five officers with their guns drawn.” That’s when the shots were fired.

Newell and his friend both ducked in the car. They saw a man “taking cover behind someone’s driver’s side door” in the McDonald’s parking lot.

Amid the shootout, Newell said, “The scene from Mission: Impossible came to mind when Tom Cruise was driving backwards using his backup camera, and I was like, ‘Now’s the time.’”

After successfully fleeing the parking lot, Newell—who attributes his calmness under pressure to serving two tours in Verdansk, a fictional city in Call of Duty—told his friend, “Next time we’re going to Chick-fil-A. This kind of stuff never happens at Chick-fil-A. The employees would come out of the building and shield us from the bullets at Chick-fil-A.”