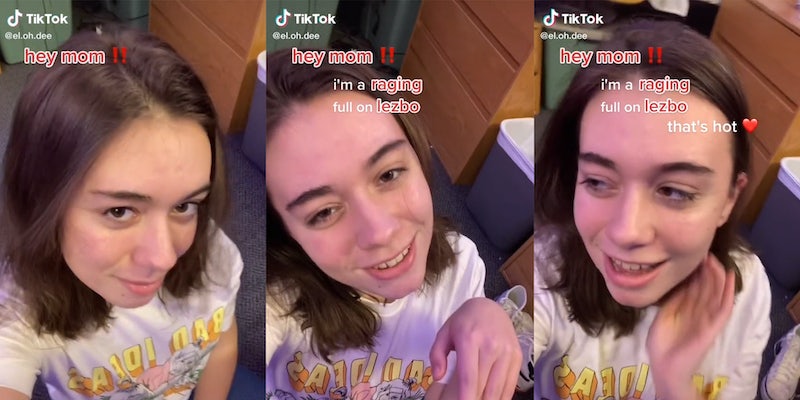 ‘This one is so much better’: TikToker gives new meaning to widely hated ‘raging full-on lesbo’ song with parody version

Savana Santos received intense backlash on TikTok for her song “Like A Woman” in early March because of the lyrics, “Hey mom, I like boys, too. I’m not a raging, full-on lesbo.” Now, TikToker Elodie (@el.oh.dee) has parodied Santos’ lyrics to celebrate “raging, full-on” lesbianism.

“Hey mom,” Elodie’s audio begins, “I’m a raging, full-on lesbo. That’s hot.” The TikToker debuted the audio in a TikTok posted on March 22 that by Friday had been viewed almost 45,000 times.

The original snippet of Santos’ song received backlash for multiple reasons. Primarily, the term “lesbo” (or “lezbo,” as many TikTokers wrote it), can be considered to be a derogatory term for lesbians. Additionally, many LGBTQ TikTokers found that phrasing “raging, full-on” categorized the song as homophobic.

“We’re all entitled to our own self-discovery process,” TikToker @mik.rib wrote in the caption of their video about the song being homophobic. “But that doesn’t give you free reign to put down marginalized groups [like lesbians].”

Many commenters on Elodie’s video celebrated that the user “fixed” Santos’s song.

“This one is so much better,” @kenziesoleil commented.

“Such an improvement from the other audio,” @chronicallyyours_ wrote.

“I can get behind this version,” @mollyhilts48 commented.

Santos apologized for her lyrics in a TikTok and said that she “fucked up” because she sang about “something [she] thought she was educated about as a part of the queer community” and used a derogatory term.

“It is never my intention to ostracize a group of people or harm anyone with the art that I create,” Santos says in the TikTok. “This is a huge learning experience for me on my queer journey.”

Santos has also posted her song with new lyrics. In the new version, she sings, “Hey mom. I like boys, too. Thought I was only into girls, I mean I was for like a second. But that’s what’s hot about 2022. You can switch it up and swing whichever fuckin’ way you want to.”

“I’m going to make some of you mad, and I’ve accepted that. But I love this song,” Santos wrote about the lyric change in her TikTok about it. “If you don’t understand this song, it isn’t meant for you.”

Many commenters informed Santos that they think her updated lyrics are still an issue.

“The lyric ‘switch it up and swing whichever way you want’ literally implies that [sexuality is] something you have control over,” @rueshousewife commented.

“This song AS A CONCEPT is problematic,” @tomatosoup.jpg wrote.

“The whole song is about how you would date men if they loved you the way women do,” @thatnegrita commented. “Do you not see what is wrong with that ?”

Elodie also commented on Santos’ video about the updated lyrics and said that the new version of “Like A Women” is “worse now bc you can tell [Santos doesn’t] think anything is wrong with it.”

In a TikTok direct message to the Daily Dot, Elodie said that they found both versions of Santos’ song “problematic.”

“[The song] makes it seem like lesbians can just be attracted to men if they’re the right kind—which they can’t, obviously, otherwise they wouldn’t be a lesbian,” they told the Daily Dot. “It was a gross attempt at a song representing her experiences.”

Regarding their own parody, Elodie said they “randomly thought of it” and that it “would be funny thing to post that other lesbians might laugh about with [them].”

“I think it’s become a fun way to reclaim such a frustrating situation,” they said.

The Daily Dot reached out to Santos’ team via email.