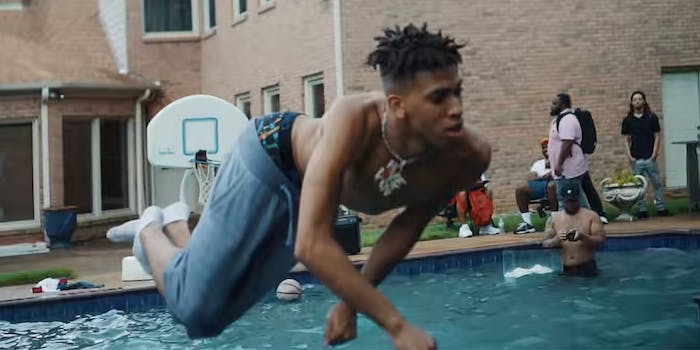 'Jump in the pool if you're valid.'

The exploitable video of a group of men jumping into a pool in increasingly elaborate ways has found its true purpose as a TikTok meme, used to lovingly, and sometimes not so lovingly, pass judgement on people and things.

What is the ‘jump in the pool if’ meme?

How the meme works is that the TikToker heads the video with a prompt, such as “jump in the pool if you’re valid.” Then each man jumping into the pool gets a label attached to him, whether it’s a real person’s name, a fictional character, or a fandom group. Sometimes the video is edited to have the last man in summersaulting back out to show that whoever he’s representing isn’t really a part of whatever it is.

‘Jump in the pool if’ fandom memes

There are fandom versions, with characters from Marvel and Star Wars franchises dominating the space.

And anime remained as divisive as ever, with people using the meme to express either their love or deep seated hatred of the genre.

Other uses of the meme

Some people decided this was the ideal meme format to be mean to each other. They’re even back to using “gay” as an insult and making fun of other people’s hobbies.

But others chose to use it to call out capitalism, subpar fast-food places, Karens, and more, landing us firmly back in the present.

Basically, it’s a perfect microcosm of the internet.