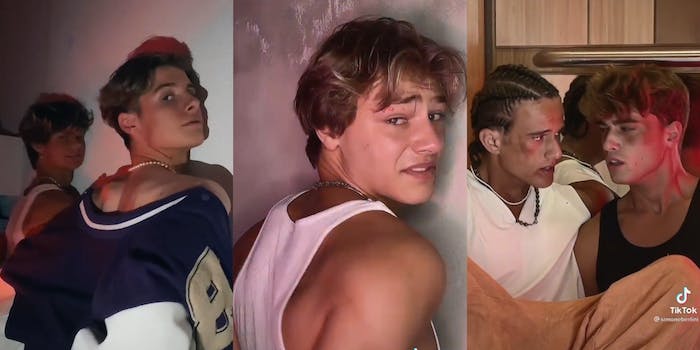 It's meant to be sexy.

You haven’t experienced true cringe until you’ve visited the crossover point between thirst trap TikTok and POV roleplay TikTok. In this melting pot of endless creativity and dubious acting skills, the latest trend involves TikTok twunks pretending to get sexily arrested. Unsurprisingly, this idea was popularized by white people.

POV roleplay TikToks depict a fictional scenario from a specific point of view (POV). Some subgenres are well-suited to thirst trap influencers (ie. romantic boyfriend POV clips) while others can be much darker, like last year’s trends for morbid 9/11 fantasies and domestic abuse roleplay. The new “getting arrested” trend falls somewhere in between, kicked off by TikToker Gage Bills. On August 16, he posted a TikTok of himself cosplaying as JJ from the Netflix show Outer Banks, wearing a white tank top while getting shoved against a wall with his hands behind his back.

This video is slightly more complex than Gage Bills’ usual fare, which is mostly geared toward a) being handsome, and b) doing lackluster lip-syncs while smoldering at the camera. For some reason, his Outer Banks TikTok caught on, racking up 21 million views and inspiring a flood of copycats. The most popular ones all follow a similar formula, starring young men in tank tops. They pretend to get arrested while crying and/or telling the camera “I love you,” often with a homoerotic vibe.

Some people must find this trend genuinely hot, given the millions of views on some of these TikToks. But the main response on social media seems to be embarrassment and derision. There’s a distinct undertone of clueless white privilege to these fake arrest videos, with young white men fetishizing the idea of getting pushed around by police. And even if you don’t analyze this on a political level, the videos themselves are just deeply cringeworthy. Most of these guys are not great actors, and their arrest scenarios focus heavily on pouting and flexing at the audience.

The sheer absurdity of the trend soon inspired some parodies, like this one from TikToker Brody Wellmaker, who envisions himself as a parent stumbling across their son filming a “getting arrested” POV clip.

Basically, “POV: getting arrested” is a perfect storm of bad TikTok themes. It’s cringey and offensive, and it’s all based around the creative tastes of thirst trap influencers with more followers than common sense.