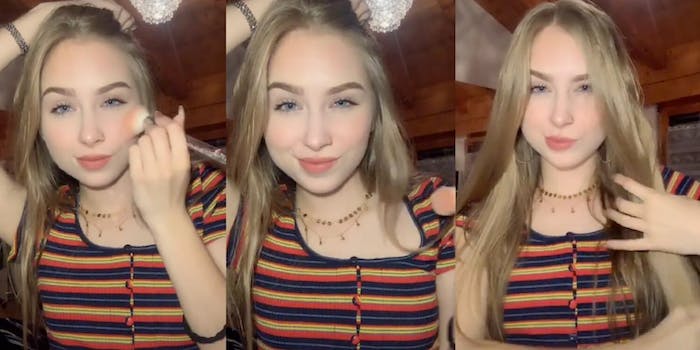 'This is so triggering.'

TikTok users are filming simulations of domestic abuse and violence as part of a “point of view” video trend on the app, Vice first reported. While many are made with the intention to spread awareness, critics say the videos could cause more damage than good.

In a March 29 video, TikTok user @taylore.rae simulated calling the police while covered in bruises and smudged makeup. The user pretended to order pizza as she disclosed details about the abuse.

User @cliocrowhurst posted a video on Jan. 16 in which she simulated being shot by an “abusive boyfriend who got too drunk. The video accumulated over 90,000 likes.

Jennifer Jordan, whose TikTok username is @jenniferjordi, posted a video in June 2019 with the caption: “you go on a date with your abusive boyfriend and it doesn’t end well.”

In the 15-second video, Jordan smiles and applies makeup to “I Don’t Want To Set The World On Fire” by The Ink Spots. Then, the camera cuts to her covered in bruises and tears in front of a dark background.

The video went viral, accumulating over 3 million views and over 542,000 likes. Among over 6,000 comments, viewers wrote that the content was “triggering” and “romanticizing abuse.”

“Some of us have ptsd from these things bro…at least put a warning,” one user wrote.

Jordan told the Daily Dot that point-of-view videos simulating abuse are “helpful for raising awareness” and that she understands why some are triggered by her video.

“My motivation behind posting the video was to raise awareness,” Jordan wrote in an Instagram message. “To let people know that being in a relationship with someone abusive will never end well.”

According to the National Coalition Against Domestic Violence, one in four women and one in seven men have been victims of severe physical violence by a partner in their lifetime.

Amid the coronavirus pandemic, the National Domestic Violence Hotline has reported a drop in calls and digital communication from victims. Advocates say social isolation could be putting victims at higher risk because they can’t get away from abusers long enough to reach out for help.

Miriam Torres, a sexual assault prevention advocate and creator of “Because of What Happened” affirmation cards, said she believes the TikTok trend is harmful. She said advocates must bring attention to abuse in a more constructive way.

Torres said that “we all know what abuse looks like” and that a more productive video would include safe dating tips.

“Helping people identify abuse doesn’t need to be re-traumatizing and that’s exactly what those kinds of videos do,” Torres told the Daily Dot in an email. “They re-traumatize people who are trying to heal.”

Izzy Fanucci, former president of Not On My Campus advocacy organization at the University of Texas at Austin, said that addressing this trend is important considering it’s Sexual Assault Awareness Month.

Fanucci said the trend normalizes the conversation around domestic violence but that it could be potentially damaging because there are rarely trigger warnings.

Jordan said she wishes she would have put a trigger warning on her video but that by the time it went viral, it was too late.

“Unfortunately you can‘t edit captions on tiktok after you posted the video,” Jordan wrote. “And as soon as I noticed that I should have added a warning, the damage had already been done.”

Even though she received a slew of negative comments, Jordan said she was also flooded with support. She said that people told her their personal stories and thanked her for raising awareness.

On Twitter, users have criticized the TikTok trend, saying it’s trivializing and concerning.

TikTok’s community guidelines specify that the platform does not allow content that glorifies or promotes violence or suffering. It notes that newsworthy content or content meant to raise awareness are exceptions to this rule.

Editor’s note: This story has been updated.