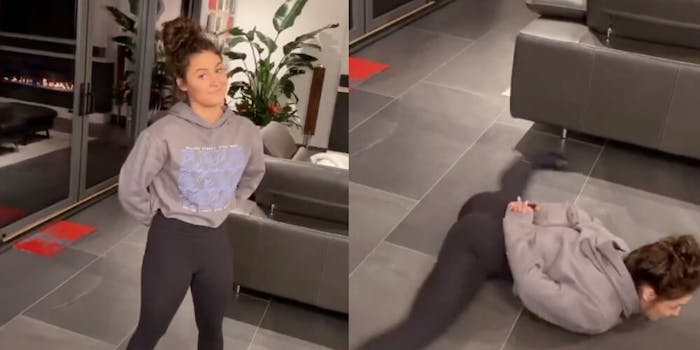 What is the TikTok ‘flex challenge’?

Teens are showing off their flexibility for the latest challenge.

It seems there’s a new TikTok challenge flooding our feeds every week, each one sillier than the last. The latest challenge to take over the app involves people lying down and attempting to stand up without using their hands, which usually results in people flopping around like fish.

The challenge originated when TikTok user @ashbashuno shared a video of herself and her boyfriend attempting what she called the “fish challenge.” The video showed the couple lying face down on the ground, holding their hands behind their backs, and attempting to stand up without rolling onto their sides or backs.

The challenge was quickly taken over by TikTok users who are extremely flexible, like cheerleaders, dancers, and gymnasts.

According to Know Your Meme, TikTok user @jax_kranitz was the first to turn the sound byte into the flex challenge. She posted a TikTok of the challenge and was able to sit up by going from a plank position into a split. She captioned the video, “someone please duet this and see if you can get it faster” and used the hashtag #newflexchallenge.

It took Kranitz approximately three seconds to stand up, so it may be difficult to beat her time. But that didn’t stop people from trying. Kranitz’s video has nearly 700,000  likes, and #newflexchallenge has 8.6 million views.

But not everyone was successful. Many attempted and failed, and the results are hilarious.

Some took the challenge to the next level and found their own ways to stand up from a split.

As the challenge gains popularity, TikTok users may even see athletes find more creative ways to stand up from the “fish challenge.”