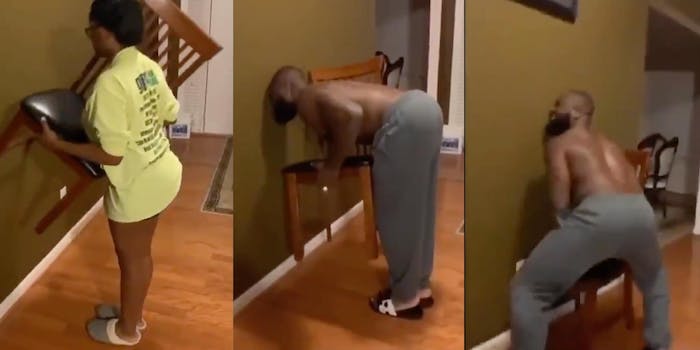 The chair challenge is taking over the social app, and not for the usual reasons. No one has injured themselves and there’s no catchy soundtrack, but there is definitely a catch: it seems only women can pull it off. It turns out women’s lower center of gravity, and perhaps our feet size, make us uniquely capable of pulling off the viral challenge.

The premise of the chair challenge is simple enough. You’ll need at least one woman and at least one man to try it out, along with a clear wall and a chair. Nothing fancy, a dining chair will do. Place the chair to the side and have the woman start. Place one foot against the base of the wall, and the toe of your other foot against your heel. Then back it up one more time, for a total of three foot-lengths back. Then place your feet side-by-side, and lean over to place the top of your head against the wall. Drag the chair underneath yourself, and pull it up to your chest. Then you just stand up straight, and the chair legs shouldn’t bump the wall.

Tried the tik tok chair challenge cause i thought it was fake…… #TikTok #ChairChallenge pic.twitter.com/5Nf5NYsMAt

People are trying the chair challenge out, not necessarily because it is a thrilling internet challenge, but because for the most part, only women can pull it off. In nearly every video, the men attempting to stand with the held chair find themselves stuck with their heads against the wall. Considering how easy it is for the women to stand up—it’s quite simple, I tried—it is a strange and baffling thing to see.

Why can’t men do the chair challenge?

Another scientist, however, disagrees. Professor Brian Ford of Cambridge University told the Sun that most men fail due to the size of their feet, rather than their center of gravity. “It is true that women have a lower centre of gravity than men, by several centimetres, but that has no bearing on this crafty little trick,” he said. “Men have longer feet than women. Two paces back for a man would be some 60cm, for a woman it’s more like 50cm. The man’s larger feet mean he is farther away from the wall than the woman, and is thus leaning forward. The woman’s legs are closer to the wall, and are thus leaning back.” He said this gives women an advantage in the challenge.