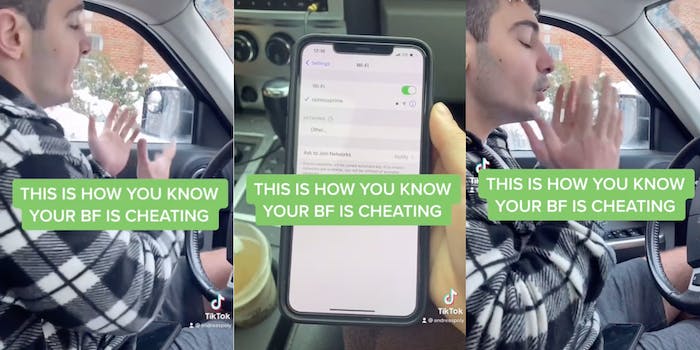 TikTok users have revealed several innovative ways to discover infidelity in a relationship.

There was the man who was caught cheating thanks to his FitBit after he burned hundreds of calories at 2am. And the unfortunate philanderer whose Ring doorbell gave him up. Now, adding to this list of modern cheat traps, a woman on TikTok is claiming she caught her boyfriend cheating through his phone’s WiFi settings.

In a video posted on Tuesday, TikToker @andreaspoly (full name Andreas Polychronis) is seen sitting in the driver’s seat of a parked car. His girlfriend appears to be filming him as he frantically attempts to defend himself against her cheating accusations.

At the beginning of the video, Polychronis’ girlfriend demands that he “go and knock on her door right now.” Polychronis stumbles through a defense and immediately accuses his girlfriend of being “crazy.” He notes that there is no car in the driveway, which likely indicates no one is home, and claims, “I don’t know this girl.”

His girlfriend then demands to see Polychronis’ phone. He confidently produces it and begins scrolling through old text messages. “See, you see Megan anywhere? Nothing, nothing,” he says. He even flips to his missed calls, again showing nothing suspicious.

But then his girlfriend seizes the phone for herself. As Polychronis continues to plead his innocence, she turns on his phone’s WiFi. Immediately, it connects to a nearby network named “optimusprime.”

When she shows Polychronis the phone, panic is clear in his voice. He attempts to fumble through an explanation, but the TikTok ends soon afterward.

The video is almost certainly a prank. Polychronis’ page is filled with couple’s comedy skits, including plenty of jokes about cheating. At least two other videos on his page riff on the idea of a cheating boyfriend, so this video was likely the couple’s latest brainchild.

Still, it’s a clever approach. Viewers were amazed by the innovation, with many promising to try it out for themselves. The majority of comments came from women who recognized red flags in Polychronis’ behavior even before the big WiFi reveal.

“The way he was reacting from the beginning I knew,” one user wrote.

“Its the stuttering and gaslighting for me,” another added.

“When he said ‘she’s not even home’ he gave himself away lmao that’s how I caught my ex,” one sympathetic viewer commented.

One user shared their own modern anti-cheating hack, recommending that concerned partners check the “frequent locations” on their significant other’s phone. According to @oliveyou168, you merely need to “go to Settings—>Privacy—>location services—>system services—>frequent [significant] locations,” and voila. You’ll know if you’re dealing with a cheater.