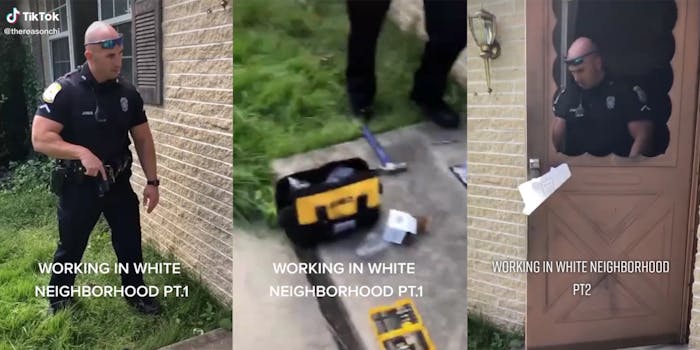 He quickly attracted the attention of armed police.

In a pair of TikTok clips, a Black locksmith highlighted the dangers of taking a job in a white neighborhood, quickly attracting the attention of local police.

Filmed from the locksmith’s perspective, the first video shows him explaining to a group of police officers that he and his co-worker have a work order to change the locks on a house. The police seem doubtful, with one officer circling them while holding an assault rifle, telling the TikToker to stop filming their conversation.

“We’re here for a complaint, that’s all,” says the officer holding the rifle. One of the other officers has also drawn his weapon, holding it as if he’s responding to a threat. The house itself appears to be unoccupied, with a realtor’s sign posted outside. Meanwhile the locksmiths are standing with their tools on the doorstep.

This awkward exchange continues in a second TikTok, with one of the locksmiths remarking, “They’re not used to Black people” in this neighborhood.

The police officers don’t seem especially interested in investigating what’s going on, treating the situation as a dangerous standoff requiring deadly weapons. Viewed more than 800,000 times on TikTok, these videos are also spreading fast on Twitter and Facebook, with commenters pointing out that the scene looks like a clear case of racial profiling.