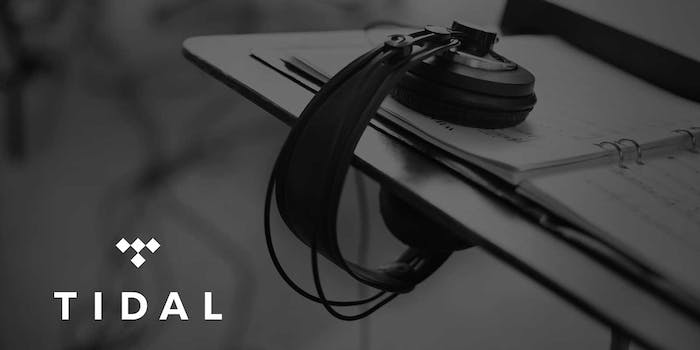 Tidal might be the best thing that happened to music streaming

Sometimes a little competition can be a blessing.

You crazy for this one, Jay.

Announcing his newest business venture in grand fashion this week, the rapper and entrepreneur unveiled Tidal, a streaming music service that Jay Z has convinced 17 other of the world’s most popular musicians to take a stake in. But while these other artists showed up to the press conference and signed their names on the dotted line, it’s Jay whose investment in Tidal is truly significant, having reportedly dropped $56.2 million on the premium streaming service, the best version of wish runs for $19.99 a month. “There will be structures because we want to present it to as many people as possible,” said Jay. “But it definitely appeals to people who really care about the music and want to hear it the way it’s intended. And hopefully some day with technology we figure out how to deliver that hi-def sound maybe even in a $9.99 model. Who knows what the future holds.”

Who indeed. Tidal has already been met with a heavy amount of skepticism, particularly from those who doubt it can defeat streaming giant Spotify. However, Jay Z’s Tidal plans may not be so crazy after all, nor do they necessarily have to mean pitting the service squarely against Spotify. In the future, streaming could very well be a buffet, rather than a fixed menu.

The most apparent reason to sign up for Tidal, at least if you’re a serious music fan, is its focus on “lossless audio,” the kind of high-resolution music that possesses better sound quality. Neil Young has gotten behind this kind of technology too, with the launch of his Pono music player. Tidal also has several cool features, including one called “Audio Search,” which functions like the app Shazam to identify songs using your device’s microphone. And the interface has been praised too, though it isn’t that different from Spotify’s. But Tidal’s primary strength, particularly in comparison to Spotify, is its focus on star power. In addition to hosting videos, it already includes a bunch of artist playlists, as well as other rarities from their catalogues. That Tidal is supposedly “owned” by musicians may be why powerhouse pop star Taylor Swift has allowed her music on the service, after pulling her catalogue from Spotify and very publicly declaring that she believes it devalues artists.

Tidal’s drawbacks are numerous as well, though (the Irish Times literally came up with 99 problems associated with the service.) Chief among them is that $19.99 price tag for premium audio. Tidal does offer a less fancy version for $9.99, though for that price, you could just keep subscribing to Spotify. There’s also ample evidence to suggest that most human ears can’t even tell the difference between high-res and standard MP3 audio. And if you’re ears can tell the difference, you still need the right kind of speakers to fully enjoy the enhanced listening experience Tidal claims to be offering. In this sense, the service may be the streaming equivalent to Sony’s new Walkman— an immaculately designed product, likely to appeal to few other than the most intense audiophiles.

There’s been a lot of discussion about how Tidal is trying to be the Netflix of streaming services, but this equation is somewhat problematic. “Fans use streaming as a way to check things out before they buy, or to hear things they wouldn’t pay for otherwise,” notes Wired’s Angela Watercutter. “Trying to turn the new Beyoncé or Kanye West record into the House of Cards of your boutique audio service backfires for that very reason. HoC is/was a new show, one that came as a surprise to Netflix users; but any new project from one of these megastar artists has a built-in fanbase, and those fans are going to get their hands on it no matter what.”

Watercutter makes a good point here, though she is forgetting one thing: House of Cards now has a built-in fanbase too, and Netflix is doing great. They’ve also got Orange Is the New Black and a library full of other original and non-original content, most of which could be torrented illegally or found elsewhere on the Web. But people still subscribe to Netflix, because they like the premium experience. They like knowing they’ll have instant access to that new season of Unbreakable Kimmy Schmidt as soon as it drops next year, or that if Arrested Development comes back (yet again,) they’ll be the first ones to see it.

Right now, most streaming services essentially offer the same thing. But it doesn’t have to be this way.

It’s not untenable that Tidal could amass users the same way. Music remains even easier to get a hold of on the Internet that movies and television. And with advertising, massive album rollouts, free downloads, and the persistence of radio, music also constantly surrounds us in a way no other art form can, even if the music industry itself remains wounded. However, if gaining access the new Beyoncé or Kanye West before anyone else means subscribing to Tidal, then the most loyal of fans may decide it’s not worth the wait and end up going directly to the source. There are levels of fandom, after all. The person who torrents House of Cards two weeks after it came out is not the same as the person who waits up till midnight to watch the first episode, just the same as the casual Beyoncé fan is not the same as the one who has seen her in concert seven times.

For Tidal to succeed, the greatest obstacle they might have to overcome is not exclusivity, but complacency. As The Guardian’s Michael Hahn writes, “if the relationship between music and tech over the past 15 years tell us anything, it’s that those who come late to the party barely get past the porch: We watch videos, overwhelmingly on YouTube; we stream, overwhelmingly, on Spotify; we buy downloads, overwhelmingly, on iTunes. What are the odds on such a latecomer carving out a market?”

Changing the current mechanics of the music industry would be incredibly difficult, but it’s not impossible. While iTunes has long been the go-to place for downloads, and YouTube/VEVO have certainly become the go-to place for videos, Spotify has really only emerged as the go-to place for streaming music within the last several years. A myriad of other services do exist, though some would argue that most are on a race to implosion rather than success.

clamoring to get in on the action every day. And HBO’s HBO Now proves that the landscape is malleable, shifting all the time. Bloomberg View’s Katie Benner warrants that with music, “It’s practically frictionless to leave a service and sign up for a new one. You don’t lose any music. You were always only renting.” This is why the key to movie and TV streaming is options; the more there is to chose from, the more people there are customizing their cord-cutting experience to figure out which combination is right for them.

Right now, most streaming services essentially offer the same thing. But it doesn’t have to be this way. Tidal stands a chance at becoming the prefered service of “serious” audiophiles, but they could go a different direction too. If they ramp up the social experience of listening to music, putting fans closer to direct interaction with artists than any other streaming service, then they might also be able to cash in on the connectivity that drives an open Internet. The World Wide Web is fundamentally about democratizing user experience, and casting a vote for Tidal could also mean casting a vote for your favorite artist.

“I’ll be loyal to whoever offers me the most for my $10. Period. I don’t distinguish between whether I’d rather give my cash to a rich musician or a rich tech dude. Buying anything is basically the process of giving money to a rich person to get something that I want. Today it’s Spotify. If Tidal’s schtick—getting money into the hands of artists—means the service gets a better selection of songs, and if the user interface isn’t a nightmare, then why not give my $10 to Jack White? Yeah, those are all big ‘ifs,’ and I have my doubts that any or all of them will come true. But if they do, it’s easy to switch.”

The market for streaming music is not set in stone. Spotify could very well remain the dominant force, but there are plenty of other possibilities too. Even if Tidal fails, another challenger could rise to the occasion. Apple and Beats have their own streaming service which is poised to compete with Spotify on the way. “James McQuivey, a music analyst at Forrester Research, notes that while there’s room for an upstart service to elbow its way into streaming music business with that kind of premium offering, just as Netflix and Amazon have done with TV and movies, artists simply may not be willing to take that kind of risk,” writes Watercutter at Wired. “Then again, Swift’s catalog—minus her current hit record 1989—has been streaming on Tidal since last week.”

At the moment, streaming is still anybody’s game. When Kendrick Lamar’s new album, To Pimp a Butterfly dropped on Spotify last week, it brought in about a million dollars via streaming plays. On the one hand, that could mean that Spotify has already already locked up the game to become the most profitable content hub for artists. On the other, it could mean the potential for streaming websites is capable of reaching financial peaks we haven’t even seen yet.