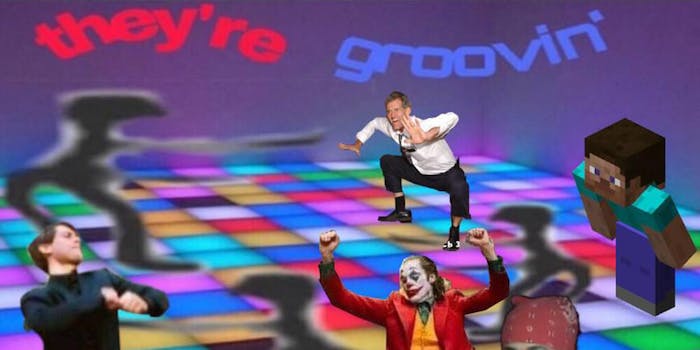 The greatest crossover in meme history?

The role of the Joker has had numerous actors, from the late Heath Ledger to Suicide Squad‘s Jared Leto. Our latest contender is none other than actor Joaquin Phoenix, who plays the titular character in the upcoming Joker.

While many comic book fans are excited about the film, Uproxx reported Wednesday that many others aren’t so thrilled. Reddit and Twitter users are creating memes to poke fun at the movie’s premise. One, in particular, gives a throwback to another meme-worthy superhero movie.

In it the viral meme that’s making waves on Reddit, Phoenix’s joker dances alongside Tobey Maguire’s Spider-Man, aka “Emo Spider-Man” from the infamous Spider-Man 3 film.

The pre-film concerns come from individuals who feel uneasy about the character’s portrayal. The character is a disenfranchised white man who turns violent against a society that has rejected him. Time magazine didn’t hold back in its online review. Time refers to Phoenix’s Joker as “the patron saint of incels.” Some Twitter users even took screenshots of the Joker and compared it to that cringy dance scene from Spider-Man 3.

Correction, no way anything in Joker is worse than the Emo Peter Parker dance on Spider-Man 3 pic.twitter.com/MK4E3hq0T8

Meanwhile, hardcore fans are defending the film, thinking others are over-reacting at a movie that hasn’t been fully released yet. They also cited that, so far, Joker has received mostly favorable reviews, even earning an 83% on Rotten Tomatoes.

However, if there’s one thing we can count on to unite the fans and non-fans alike, it’s memes.


Peter Parker and the Joker dancing from MemeTemplatesOfficial

Joker will release in the U.S. on Oct. 4. Whether you’re looking forward to or dreading the release to this movie, the online discourse and reviews to come in during the next month will be both enlightening and hilarious.

The guy that did this is a god from dankmemes


My chocolate must not be touched by human hands from dankmemes

Until then, let’s keep the Joker and Spidey memes coming.