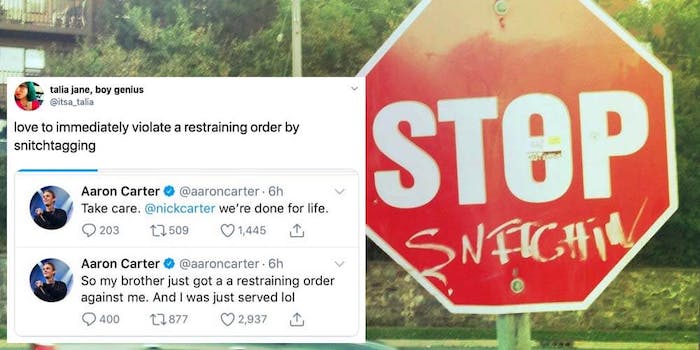 What is ‘snitchtagging’—and why is it a major Twitter ‘no-no’?

It’s more or less a universally accepted fact that nobody likes a tattletale or a snitch. Obviously that doesn’t include law enforcement, teachers, or others in positions of authority who benefit from said snitching. But even then, does anyone actually respect a snitcher? Exactly. Allow the prosecution to rest the case. And apparently, the same goes for those who engage in snitchtagging.

Snitchtagging, for the uninitiated, is essentially the practice of strong-arming your way into either a subtle or not-so-subtle Twitter conversation about a third-party who has not been tagged, and making them aware of the conversation by tagging them. At best, it’s an obliviously ignorant online faux pas, and at worst, it’s deviously intentional.

In either case, it’s a total lack of Twitter etiquette, as you can see in the following exchange below:

It’s called SnitchTagging. If someone doesn’t @ the person they’re discussing it’s not appropriate to tag that person in.

The practice has become so widely practiced at this point that Dictionary.com defines it as: “the act of tagging the subject of a negative post about them, especially on Twitter, that they weren’t already tagged in (e.g., a subtweet).”

“It ensures the subject is aware of the criticism,” the definition adds. Meanwhile, Urban Dictionary lists the following example:

“Jeff posted about Kate that she was a hoe without tagging her and Sam commented Kate’s username so she would see the post. Jeff: ‘I blocked Sam because he was snitch tagging.'”

Now, research has confirmed that subtweeting does indeed present a serious lack of chill—however, snitchtagging may actually be worse. In other words, while Jeff may have been in the wrong to call Kate “a hoe” on Twitter in the first place (like, grow up Jeff), Sam is unequivocally a little bitch for making her aware of it in such a passive-aggressive way.

Mark Marino, an associate professor of writing and the director of the Humanities and Critical Code Studies Lab at USC, told the Los Angeles Times earlier this year that snitchtagging by tweeting directly at a person is like, “ringing that person’s doorbell and saying what you think of them.”

“It’s hard not to think of the middle-school version where you’re waiting for the sparks to fly,” he added, likening the act to kids egging on a schoolyard fight.

In any case, it’s not hard to see why those who practice snitchtagging are often called out on Twitter, with many users adopting a zero-tolerance policy on snitchtaggers.

This is the most pointless snitchtagging I’ve ever seen. (All snitchtaggers get blocked, no exceptions) pic.twitter.com/h3ADndSm8A

Everytime I tweet about a celebrity one of you snitchtag them. Every. Time.

Snitchtagging is harassment. It’s specifically an attempt to start an argument, and when you’re tagging someone with a significant follow count, it encourages dog piling. Don’t do that shit.

snitchtagging is the most baffling behaviour on this website, why not just tattoo ‘i’m the one who told the teacher when the other boys said a bad word’ on your forehead? same net effect

Give the score a shot again. Pretty sure it’s on Spotify. It gets lost in the film but I think it’s great on its own.

DO NOT SNITCHTAG, COME THE FUCK ON

And then there is this unconventional example, in which Aaron Carter engages in some perplexingly savage snitchtagging on … himself?

I mean, if you’ve gotta snitchtag, it might as well be on yourself? Everything is going great!